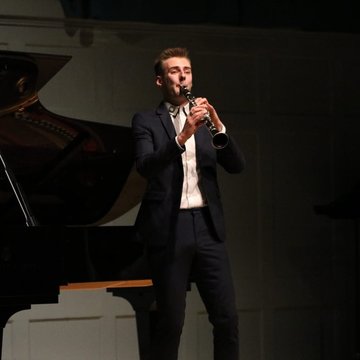 A young and versatile clarinettist who also specialises in Bass Clarinet, Friendly, reliable and quick to respond to requests and questions.
3 of 3 photos
Clarinettist
Glasgow

My approach to the clarinet has always been to be as versatile a musician as possible, so as to be able to work in any situation and setting. Having studied at the Royal Northern College of Music and Royal Conservatoire of Scotland(current) my training has been as a classical clarinetist/bass clarinetist, and so I frequently play in orchestras, chamber music ensembles and solo recitals. I also play Klezmer clarinet and frequently include this in my programes, and have formed a couple of groups. Recent highlights have been playing as soloist alongside French clarinetist Nicolas Baldeyrou, appearing as soloist with the Vacation Chamber Orchestra to play Finzi's Clarinet Concerto and playing on the Scottish Chamber Orchestra experience scheme. Outside of the classical scene, I always love doing crazy "out of the box" performances and being involved in all types of music, and collaborating with composers/song writers

Next came a totally persuasive account of the rarely-heard clarinet concerto by Gerald Finzi; soloist Ruaridh Bakke performed wonders with the clarinet part, in turn passionate, lyrical and whimsical