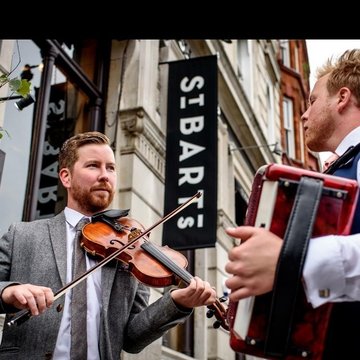 Ross is a versatile violinist based in the Midlands. Experienced performer who is happy to play for any occasion...

Ross Grant is a musician and composer based in Worcestershire, whose primary love and focus is within English traditional music. With voice and fiddle in hand, Ross has performed the length and breadth of Europe in array of different ensembles. His most recent project this year has seen him collaborate with Benji Kirkpatrick and Debs Newbold on Will Pound's Through The Seasons with a show that intertwines music with stories and wonderful visuals. With a tour and a large number of festival performances, the tour accompanied an album featuring guests such as John Kirkpatrick, Eliza Carthy and Ross Couper. The album recieved comments such as this one from Folk Radio:- "Through The Seasons will open many people’s eyes to the power of traditional English dance music." As well as gaining coverage on Radio 2, 4 and 6 music plus a live session on Radio Scotland.

Great musician. Ross was always willing to learn and play whichever song we requested in advance. Great disposition and very professional. He helped us materialised the vision we had for our wedding.

DW
Dave W
3 years ago, for a New Year's Eve in Bretforton

I have been involved with the New Year's Eve ceilidh's for a number of years and have seen the dancefloor full every year for The Bluesocks Ceilidh Band. Very professional and always bring an experienced caller to talk us through he dances.

AW
Andrew W
4 years ago, for a Wedding in Norwich

Beautiful playing for the ceremony. A great mix of classical and contemporary. We then used Ross for folk in a more relaxed setting in the reception and he was fantastic. Great to work with and a fab musician! Highly recommend!