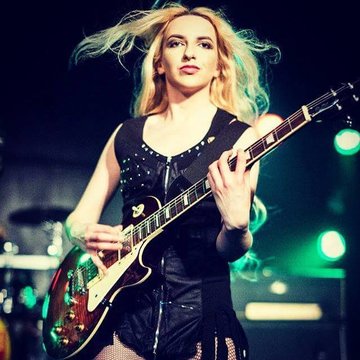 I am a professional guitarist based in London, I studied music performance at Tech Music Schools and have 5 years live and studio experience
Guitarist
St Albans
Public liability insurance of £10 million

I am a competent guitarist, I have been playing for 10 years and in that time I have managed to gain a lot of experience working with lots of different bands and artists. I studied Popular Music Performance at Tech Music Schools, one of London's top Music Universities and gained a Higher Diploma at the level of Merit. Since I have left Tech I have played with many different artists. I joined an original Indie rock band who I still play with today.We have gained such credits as becoming finalist in the Uni Music League, winning the online vote of the Uni Music League and becoming finalists in the MMG Berkshire battle of the bands. We have had many gigs all over London, venues including Proud Camden, The Borderline The Pavilion. I also played with an all female Pop Rock with an Urban twist original band called Glory. Within our first year we had played many showcases and received amazing feedback. We had the pleasure to support Duane Lamonte (X Factor) at a prestigious London venue XOYO. In August 2013 we were invited to play at Malmo Festival, a festival in Sweden's third largest city Malmo on the upcoming/young music stage. For a while I was the guitarist for original folk/indie rock artist Any O'Neil. Whilst paling for him I played along side some very established musicians such as Gemma Hill (Drummer for Robots In Disguise, X Factor, editor of Drummer magazine.) I also got to record and video a live session in London's legendary recording studio Livingston Studios. In 2013 I played in an all female rock covers band, Best Of Rock. We play classic and hard rock covers mainly from the 70's and 80's For a short while I was a dep in Reckless Heart Europe's top tribute act to the music and work of the band Heart. I played the character of Nancy Wilson the rhythm/acoustic guitar player and backing vocalist. I was a member for 2 years of a touring all female Punk/ Rock/Ska covers band called The Sex Pissed Dolls. They have an edgy/Glamours stye which a big Punk following. We played all round the UK & Ireland which were headline festivals and small music venue tours. Including: Being joined on stage by lead guitarist and songwriter Roddy Radiation from 80's Ska band The Specials. A UK tour of 8 different famous O2 academy's. We had festival slots sharing the stage with bands such as Bad Manners, Gabrielle, UB40, Status Quo, The Blockheads, The Levelers and Suzi Quatro. The band were signed to Solo music agency and opened this years Isle of Wight festival, playing a total of 3 sets at the festival throughout the weekend. I also have my own function/events band named Harmony. In 2015 I played guitar in a video feature for Fabulous magazine (The Sun) with actress and singer Pasty Kensit in which I acted as a guitar playing double for her. I am a current member of all female original rock band Dorja. In 2016 we recorded our debut single "Fire" at West Triad Studios in LA owned by Mark Schulman (Pink). We released our single in July 2016 followed by a short debut UK tour.

Performance details
I can perform outdoors
I have a car I can use to travel to gigs
I can perform with backing tracks
I can perform while walking around a venue
My equipment is PAT tested
Encore awards
4th Encoreversary
Musicianship
Genres:
Classical, Jazz, Folk, Pop, Rock, Electronic
See all genres
Instruments:
Guitar
See all instruments
Event types:
Concert, Bar / Club / Venue event, Recording session, Theatre / Show, Cruise
See all event types
Other skills:
Fluent improviser
See all skills

Popular B, 4 years ago

So much energy and great to watch