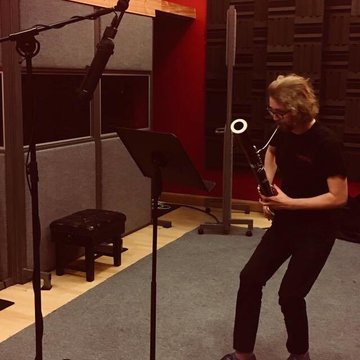 Ronan Whittern was born in Cheltenham, Gloucestershire, and studied in St Finian’s College, Mullingar, Ireland, and Chetham’s School of Music, Manchester. He completed his undergraduate studies at the Royal Conservatoire of Scotland, under the tutelage of David Hubbard, and Peter Whelan. In October he will be travelling to Germany to participate in the International Ensemble Modern Academy Masters course. Ronan will complete his Masters at the Royal Conservatoire of Scotland under the tutelage of David Hubbard in July. Over the last four years, Ronan has worked professionally with the Royal Scottish National Orchestra, and the BBC Scottish Symphony Orchestra. He has also participated in the RSNO Professional Experience Scheme, London Sinfonietta Academy, Klangspuren Schwaz International Ensemble Modern Academy, and has participated in a similar scheme with the BBC Scottish Symphony Orchestra. He has also been a finalist in the RCS Classical Concerto Competition, performing the Weber Bassoon Concerto in F, and recently won the RCS Governors Recital Prize for Chamber Music with his group Trio Arcania. During his time at the Conservatoire, Ronan has had the opportunity to pursue specialisms in Historically Informed Performance Practice, and contemporary music. In his research in to the performance of contemporary music, Ronan has worked closely with a number of young composers, including Henry McPherson, Rory Comerford, Gregor Forbes, and is currently collaborating with Irish composer Christopher Moriarty-Pearson on a new work for solo bassoon, to be premiered later this year. Ronan has also performed many important repertoire pieces for the bassoon, including Karlheinz Stockhausen’s In Freundschaft, Isang Yun’s Monolog, and Dai Fujikura’s The Voice for bassoon and cello; for ensemble, including James MacMillan’s The World’s Ransoming, Oliver Knussen’s Coursing, and Enno Poppe’s Speicher I.

First class performance and punctual which was key to the proposal. A top guy, thank you Ronan

Beautiful sound, both individually and as an ensemble. Thoroughly enjoyed the performance!

A pleasure to work with. Full of creative energy and a real drive to propagate new music.

So moving and emotional, I really enjoyed the performance.