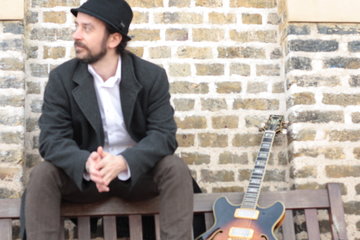 Romeo Velluto is a jazz musician, composer and session guitar player contaminated by different musical heritage. He studied at the Music Conservatoire of Milan, and previously at Cemm (European Centre of modern music). He spent the last 5 summers travelling and busking all over Europe, building his repertory with bossa-nova, blues, swing and mediterranean music. Playing alone in the streets, he developed a technique which allows to play bass line and harmony in the same time, record it live and play on it, it’s like having an instrumental duo. After releasing his first CD of originals (a mix of cool jazz and mediterranenan influences), he moved to London; thanks to his huge experience of functions and versatility, he's been rapidly involved in many bands and duos with singers. He's now at work for his second album. During his career, he had the opportunity to play in famous jazz clubs like the Blue Note of Milan and Ronnie Scott in London, plus several festivals like Tuscia Jazz, Umbria Jazz, MiTo Festival, Jazz Festival of Italian Conservatories ;he also played with Cosimo Keita Cadore (Shakira, Zucchero, Lionel Richie) Vittorio Bianco (Albano, Tullio De Piscopo, Gino Paoli, Rita Pavone) The Duke Street Big Band, Francesco Piras (Vallanzaska)Gioel Severini (International House of funk). He’s been active in theatre and experimental productions, like performer and composer with many Italian and Spanish companies, he performed with Giorgia Batocchio and Rossella Bellantuono among others (Zelig), and Pat Moonchy. -Band leader of Velvetnojazz band, Electromoovin, co-leader of Ever'n'jazz and In Jazz Veritas band.

Yes, if you are looking for a dj service via our PA after the final set we provide it for an additional cost starting from £100.

We usually set up in 1 hour, as soon as our PA is set up we can provide a free playlist service to help set the atmosphere.

We are happy to chat and make sure to find what works better for your event.

We can if requested in advance, up to 3 song is free.

The Tuscia Jazz Festival in 2008

Standard Prices
All prices include:Pa equipment, Skype call, 3 songs on request
NEW!Virtual services
Personalised Music Message
Book me to create a unique music video for you to send to a friend as a gift. This could be a birthday message, first dance song for a wedding anniversary, or just your friend's favourite song to cheer them up.
£15

Romeo created the right ambiance at my 40th birthday and all my guests really enjoyed having such a wonderful musician entertain us during cocktails. Romeo always communicated in a timely manner and responded to all queries as and when they arose. He also texted me on the day to update me on his arrival time. Look forward to the next opportunity i have to book Romeo and I am sure he will be just as great at your event too! Thanks Romeo for a lovely afternoon of music!

Romeo turned up promptly, having let us know he was on his way, and played just the type of music we were looking for. An excellent contribution to our splendid day, and lots of good feedback from guests.

It was great to work with Romeo he was a great musician and really professional.

Sambinha were fantastic and we really appreciated them learning the additional songs. They were warm, accommodating and completely bought into the vibe. Not to mention the incredible performance and Francesca’s amazing voice!

Jess and Romeo played regular gigs at our pub and they add great atmosphere, the clients are happy and willing to enjoy more time together

Verified
Doreen B, 2 years ago

Jess has lovely friendly nature and was very professional in her approach to the performance. She made my 70th birthday party very special

Hi Jess, We hope you are well. We have just arrived back from our honeymoon and we are still in shock at how well our wedding day went! We just wanted to say a massive thank you.

The band were fantastic. So professional and the sound was perfect. Everyone enjoyed the music, Francesca's voice was great and the style worked really well with the evening!

Just wanted to say thank you so much for the beautiful set last night, it was absolutley brilliant, everyone was totally immersed in the atmosphere, and your voice was so beautifully expressive. It was everything we could have asked for!

The music transforms the atmosphere, carrying us through the eras: from 1920's speakeasy to Vintage Brazilian cafe!

The band were fantastic. Everyone enjoyed the music, her voice was great and the style worked really well with the evening!

We were all impressed with you and your band's performance at our christmas party. We all enjoyed ourselves and you helped make it a great party. We will definitely ask you back to play whenever we have a function!

They have been absolutely fantastic

"There are no words to express my gratitude for last night. Thank you for creating such a slick, professional performance and for being so reliable, kind and fun throughout the whole process."Marie Naffah

Thank you so much for Saturday, I thought you were brilliant, one guest commented that your music was "perfect".

The music was great thanks. Just what we were looking for.