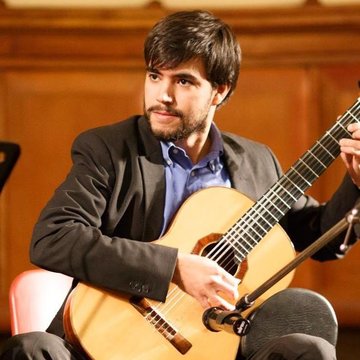 Check availability and get a free quote now - no commitment to book
From£180
Watch & Listen
About Roberto
Home page
Roberto Versluys
Like Roberto?
Watch & Listen
1-3 of 4 videos

Roberto Hernán Kuhn Versluys is a first year master studying at the Royal Conservatoire of Scotland. Roberto has participated in a number of different guitar ensembles with excellent results, including the Guitar Ensemble Of Chile, The Pontifical Catholic University Guitar Ensemble, The PUC Institute of Music Guitar Ensemble and has recently worked alongside the Jugend-Guitarrenorchester Baden-Wurttemberg Guitar Orchestra from Germany. His solo and chamber work has also led him to play in different parts of America, including Mexico, Peru, Bolivia, Argentina, Colombia and the most relevant venues in Chile. In the year 2011 Roberto was awarded the Multidisciplinary Scholarship, award given to students of the PUC Musical Institute who demonstrate excellent academic achievements in two different fields of study (Musical Composition and Performance Guitar). In 2013 Roberto Kuhn was awarded the Scholarship Outstanding Performer, a scholarship awarded by the Pontifical Catholic University of Chile to students that excel in the performing arts. In the year 2015 he was awarded a scholarship by the Ibanez-Atkinson foundation to continue his studies in the MMUS performance course in the Royal Conservatoire of Scotland.