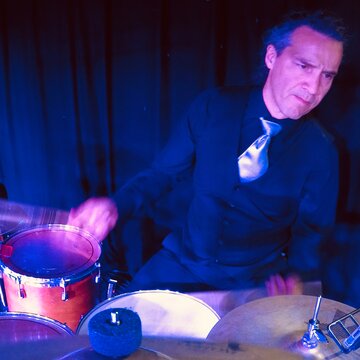 Songs I sing and accompany myself on drums:
A Foggy Day
A Nightingale Sang In Berkley Square
Almost Like Being In Love
Always
Besame Much
Black Orpheus
Cheek To Cheek
Come Fly With Me
Dindi
Don't Get Around Much Anymore
Fly To The Moon
Have You Met Miss Jones
How High The Moon
I Can't Get Started
I Love Paris
I Remember You
It Had To Be You
L.O.V.E.
Mahattan
Meditation
Misty
Mona Lisa
My Favourite Things
My Romance
Pennies From Heaven
Quando, Quando, Quando
Satin Doll
Sentimental Journey
Smile
Somewhere Beyond The Sea
Stardust
Summertime
That Old Feeling
That's Life
The Girls From Ipanema
The Look Of Love
The Way You Look Tonight
They Can't Take That Away From Me
Till There Was You
Time After Time
When You're Smiling
You Don't Know Me

Standard Prices
All prices include:PA, Drums, Fuel
Packages
Drinks reception
Two performances of up to 45 mins each during your drinks reception
£200

Incredible performer, high energy and very accurate, a must to see him perform!

Saw him performing in Redditch Theatre, such an incredible talent, really really entertaining!