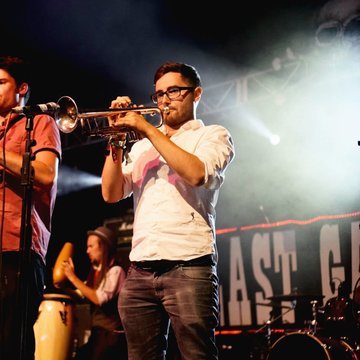 A diverse musician at home in a range of musical scenarios from Orchestral performance to pop, jazz, horn section and recording work.
3 of 5 photos
Trumpeter
London
Public liability insurance of £10 million

As a diverse performer, Robert enjoys a varied career which spans from symphony orchestra work to pop and session playing. As a soloist, he has given numerous recitals in venues including Kings College Chapel and St Mary Le Bow Church. Career highlights include performing with the Royal Philharmonic Orchestra, at Montreaux Jazz Festival and on BBC Television. Robert also enjoys performing throughout London with his chamber ensemble, Ferreira Brass. As a recording artist Robert has worked in many of London finest studios and performed for numerous record labels and well known artists including Max Romeo, Leo Stannard and Hornsman Coyote. Robert also works prolifically within the events industry and runs one of the countries leading event bands with whom he has performed throughout Europe and in many of the UK's leading venues including The Park Lane Hotel, London City Hall and the Foreign Office. Robert can also regularly be seen touring the UK and Europe with the Ska and Reggae band, The New Town Kings. Having studied with some of the worlds finest trumpet player including Robert Farley, Andy Hendrie and Julian Poore, Robert graduated from Kings College London in 2013 and has completed a masters degree at Trinity Laban Conservatoire.

Rob arrived on time, played well and was friendly and pleasant to work with. Would be happy to have him again. Thank you.