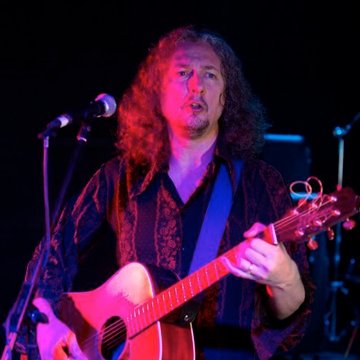 Robert Sowden I'm a professional singer, musician, writer, producer and DJ. I perform solo, or with my band, Rob & The Retros
3 of 5 photos
Singing guitarist
Reading

Robert Sowden I'm a professional singer, musician, writer, producer and DJ. I perform solo, or with my band, Rob & The Retros, my original songs and/or classics from the 60's, 70's, 80's and 90's. As DJ Retro Rob, Themed parties and events. Disco - Glam - Pin-Up - New Wave - New Romantic - Pop Two Tone - Rock - Funk - Americana - Goth - Punk I specialise in 70's and/or 80's parties and events with an option to have a live performance thrown in. If you want a special birthday or other celebration to be themed to either of these great musical eras, I'm your man. State of the art gear, P L Insurance, all the Hits and some of the misses. I've got Disco, Bubblegum, Pin-Up, Glam, Punk, Two Tone, Ska, New Wave, New Romantic, Rock, Americana, Funk, Soul, TV Themes, the lot. And if I haven't I'll download it straight away. As a Producer, I specialise in helping solo acts record and realise their materials potential. - I also promote in Reading and run a very successful regular Open Mic night called Bohemian Night. - In my history as a performer, I was the front man of successful prog' rock act Arena . - And of course I had my own band Solar as well as having many other creative projects, recording my own music and the music of others. - I have also performed music daycare for people with learning difficulties and disabilities for 20 years now.

Brown Eyed Girl
Moon Dance
Guitar Man
Make It With You
Hotel California
Take It Easy
Lying Eyes
Runaway
Little Town Flirt
Sunny
Under My Thumb
Forever In Blue Jeans
Song Sung Blue
Dancing Queen
Voulez Vous
Money Money Money
SOS
Knowing Me Knowing You
Honey Honey
Fernando
Chiqitita
Top Of The World
Close To You
Waterloo Sunset
Tired Of Waiting
Wouldn’t Be Good
What Is Love
Y.M.C.A
Yesterday
Ticket To Ride
She Loves You
All My Loving
Please Please Me
Love Me Do
I Wanna Hold Your Hand
From Me To You
A Hard Days Night
And I Love Her
Can't Buy Me Love
We Can Work It Out
Here There And Everywhere
Michelle
Eleanor Rigby
Eight Days A Week
Help
Norwegian Wood
Hey Jude
Something
Here Comes The Sun
Back In The USSR
Let It Be
Imagine
Come Together
All You Need Is Love
You Can’t Hurry Love
Baby Love
You’ve Got To Hide Your Love Away
The Young Ones
Summer Holiday
Congratulations
Suspicious Minds
Ghetto
Return To Sender
Teddy Bear
Hound Dog
All Shook Up
Blue Suede Shoes
It's Now Or Never
The Wonder Of You
Love Me Tender
That's Alright Mama
Jailhouse Rock
It's Not Unusual
Delilah
What's New Pussycat
Pretty Woman
Only The Lonely
Venus In Blue Jeans
Let's Dance
La Bamba
Rock Around The Clock
Wake Up Little Suzie
Bye Bye Love
Peggy Sue
Oh Boy
My Way
Sunny Afternoon
Staying Alive
Night Fever
More Than A Woman
Nights On Broadway
How Deep Is Your Love
You Do Something To Me
One
This Is A Low
High And Dry
Linger
There She Goes
Drugs Don't Work
Dancing In The Moonlight
Sugar Spun Sister
Sugar Sugar
True
I'm A Believer
Daydream Believer
Mr Blue Sky
Living Thing
Telephone Line
Last Train To London
Country Roads
Leaving On A Jet Plane
Annie's Song
Get Lucky
Sweet Caroline
Babylon
Angels
Valerie
This Guy's In Love
Cowboys And Angels
Freedom
Wake Me Up Before You Go Go
Careless Whisper
Can't Take My Eyes Off You
Love Is A Losing Game
Is She Really Going Out With Him
Maggie May
Come Up And See Me
Go Your Own Way
Rocket Man
Crocodile Rock
Star Man
Ziggy Stardust
Space Oddity
Life On Mars
Kooks
Wild Is The Wind
Man Who Sold The World
Crazy Little Thing Called Love
Don’t Bring Me Down
20th Century Boy
Immigrant Song
Jumping Jack Flash
Alright Now
Ace Of Spades
Whiskey In A Jar
Baker Street
Hanging On The Telephone
Heart Of Glass
Denis Denis
Rio
Save A Prayer
Hungry Like The Wolf
Stray Cat Strut
Man Eater
Take On Me
Tainted Love
Don’t You Want Me
Town Called Malice
That's Entertainment
The Air That I Breath
Don’t Stop Believing
Living On A Prayer
Summer Of 69
Take It On The Run
Amarillo
Hi Ho Silver Lining
Living Next Door To Alice
500 Miles
YMCA
I Will Survive
Copacabana
Mandy
Come On Eileen
Rivers Of Babylon
Save All Your Kisses
Rasputin
Brown Girl In The Ring
Angelo
Figero
Hold Me Close
Love Grows
Green Door
Under The Moon Of Love
A Little Bit Of Soap
Making Your Mind Up
Walking On Sunshine
Electric Dreams
Never Ending Story
I Wanna Be Like You
Can't Get You Out Of My Head
I Should Be So Lucky
Uptown Girl
Barbara Ann
Other Side
Under The Bridge
There She Goes
Luka
Hey Now, Don't Dream It's Over
I'm Not In Love
Just The Way You Are
If You Leave Me Now
No Woman No Cry
Is This Love
White Christmas
Silent Night
I Wish It Could Be Christmas
Rocking Around The Christmas Tree
Let It Snow
Last Christmas
Santa Claus Is Coming To Town
Winter Wonderland
Happy Christmas War Is Over
Do They Know It's Christmas
Merry Christmas Everyone
Merry Christmas Everybody
Winters Tale
2000 Miles
Customer questions

Absolutely. This is a really popular request. If you'd like a DJ service via our PA after the final set, we provide this for an additional £100 dependent on when the venue closes.

Solo - it takes me less than half an hour. Full band - can take an hour to an hour and a half.

Solo - I have a huge repertoire and will take requests and can theme evenings to era's as requested. As A Band - We have crafted sets with a degree of variation available.

If a song isn't included in our song list there may still be a chance we already know it. If there is a special song you'd like us to learn we are happy to do this for you if it's possible and within reason.

I interact well with audiences and create a fun vibe, as well as being able to play a great range of music.

The Global, Smokin' Billy's, The Turks, The Horn, The Purple Turtle, The Town Hall, The 3B's, OLOP Social Club, Readipop Venue and Festival, CAMARA Beer Festival, The Queens Head - Reading. The Crowthorne Inn, The Prince, The Dog & Partridge, Jagz, The Bee, The Maiden's Head, The Thatched Cottage, The Angel Inn all around Berkshire and surrounding counties.

As lead singer with Arena I have performed at the Lorelei Fest in Germany as well as the Paradiso in Amsterdam, Z7 in Switzerland, Spirit of 66 in Belgium, Borderi in Holland, The Astoria and The World's End in London and the Colonial Theatre Penns USA (where they filmed the Blob).

Standard Prices
All prices include:As a solo act. PA & Lighting. Up to 3 unique song requests. Themed set list, (e.g. 60's, 70's or 80's music etc). With the band, the prices would be at least £160 per hour extra each member depending on time and distance travelled. Negotiable.

Rob is great with audiences. Very interactive. Also, the selection of classic songs is very good. Always gets people dancing.

Rob Sowden is a talented performer who engages the audience and creates a great party vibe. Highly recommended.