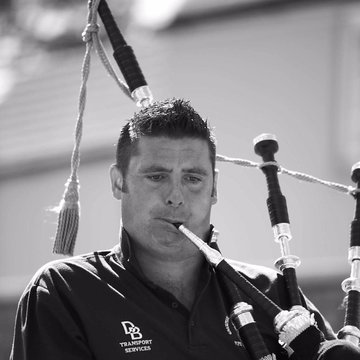 Based in Corby, Northamptonshire I am a very established piper with 35 years playing experience so far and many more to come. I started to learn the bagpipes in 1982 at the age of 9 with the Grampian Corby Pipe Band, where I played as a piper until 1999. I then took on the role of the Pipe Major at the age of 27 and remained in this role for 15 years. During my period as Pipe Major I led the band to success in competitions not only in England but also north of the border and we enjoyed success at becoming British and European champions in our grade in 2006. As well as being successful in competition we also played at many engagements including playing for HRH Queen Elizabeth on two occasions. After 32 years of loyal service to the Grampian Corby Pipe Band and teaching many youngsters to play the bagpipes, I felt it was time to play at a higher level in competition. Therefore this meant stepping down from my role and joining England's top competing Pipe Band: RAF Waddington/Halton Pipe Band. I have enjoyed two competitive seasons with this band travelling up and down the UK. I am now currently involved in the newly formed City of London Pipe Band and looking forward to an exciting future. Hopefully this will give you a insight into the experience I have and you can feel rest assured that when booking me you will get a quality performance whether its a wedding /funeral/party/burns night/new year or any special occasion. I can also provide drummers, mini band, full band and highland dancers if required. I have a vast knowledge of tunes and can accommodate most requests. Please feel free to browse some of my photo's, i will also be adding more photo's and videos shortly.

Rob was wonderful and went above and beyond. It was a real pleasure working with him and would highly recommend him.

JUST PERFECT, THANK YOU. I would very strongly recommend that if you would like a piper for any occasion book Rob.

Rob was booked to play at my mums funeral at short notice. I contacted him and he was great advising us what would happen on the day and also music we could have. We had requested a specific song and this was also no problem for Rob to play. Very pleased with his performance and I would definitely book Rob again for another event.

We hired Rob to play at our mum's funeral. Flawless. Highly recommended

Rob was excellent. He was helpful. We recommend him anytime