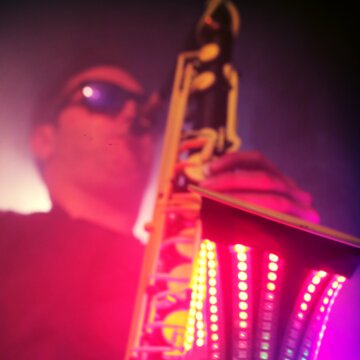 Rob Mach has performed with a wide variety of artists across many different musical styles, from Jazz to Pop, Commercial Club, House to Classical music and everywhere in between as a featured solo artist. Offering a range of unique performances like no other from providing background ambient music of Jazz and Pop classics to free roaming wireless club sets amongst party goers, Co2 explosive and high impact visual LED shows on his new V and White Party Saxes - Rob Mach is an unrivalled choice of entertainment for clients looking to make their event really stand out. His ability to improvise to any musical backing, freestyle with any DJ, and perform expertly alongside other musicians and vocalists makes him the perfect live music entertainment option to bring the wow factor to your event. Offering a choice of one of a kind LED, UV and Co2 Saxophones for the performances. Recently Rob was the full time resident Saxophonist for The Playboy Club London with over 300 performances there during this time, that most notably include Cooper Hefner's private party, NYE party and Midsummers Ball along with numerous club and celebrity events. Other high end performances include popular London venues Annabels, Sketch, Tape, Raffles, Dstrkt, Mayfair Arts Club, The Sanderson, The Hippodrome, The ECC, Groucho Club to mention a few. Rob also performs internationally recently this year performing at the Bahrain Formula 1 GP in Ibiza, Barcelona and Germany with more dates set for the end of the year including the launch of an exclusive resort in Cape Verdi in December. Rob can tailor a performance both visually and musically to match your event perfectly including learning song requests, creating a specific songs list for you, matching visuals on the Sax to suit your colour scheme and any other specific performance preferences you may have. Rob can work with easily with any DJ's or provide pre mixed music to complement his performance and can provide a self contained PA system for the performance on request. Whether you are a company looking to host a one off stand out event, a bride to be looking for a performer to create a real point of difference and bring a unique touch of class to your big day or simply provide a romantic soundtrack to your wedding ceremony, or perhaps you are looking to create that extra wow factor on the dance floor for a surprise birthday party or simply looking to bring the ultimate clubbing experience to your club night, Rob Mach is the stand out Sax performer who provides visually spectacular live music entertainment like no other.

4.9 out of 5
10 verified reviews
Satisfaction

Absolutely fantastic - kept the party going all night, lovely guy and made memories I won’t ever forget. Highly recommend.

Rob was great playing at my Nephew’s 18th party. The minute he started playing, he had everyone on their feet! Thanks Rob

The overall experience with Rob was Brilliant he played amazingly ,however the only thing I would say is he had too many breaks .And the sets were rather short

Fantastic performance by Rob and the guitarist! Rob and the Guitarist set up from our drinks reception from 1pm onwards and started off with some chilled house and with some classic live sax tunes in the outdoor area at our venue which provided a great atmosphere for all the guests as promised. Rob then seamlessly moved into the main wedding breakfast room, even playing music in both areas for a short period of time whilst guests mingled around. He then supported the wedding breakfast with some walk in tunes and background music before rapidly setting up for the night due before the evening guests had even arrived. Constantly analysing the environment and guests wants all night he kept the party going until we closing time whilst playing all the unique requests I'd asked for during the initial booking chat. All night Rob (with the Sax) and the guitarist would just join in with the music and if they felt the crowd liked it they even wandered into the dance floor playing along which everyone loved. Great music all night long and even setting up a last dance to one of our favourite songs were all the guests could join in and send the night off properly. Extremely reasonable cost considering what you get and the quality is up with the best I've seen any any function or other wedding, some of the other prices I had were almost double! Great communication throughout, even on the night. Rob just politely introduced himself when I wasn't chatting away to guest to check everything was ok and it was just fuss free as I didn't have to say or do anything. If you want a high quality friendly DJ with the agility to make it a chilled event or a party or both, with live music along with some of your favourite tunes then Rob is your man. Helped make the day and night unforgettable. Well done, thanks Rob! (10 / 10)

Hi Rob. Vicki and I just wanted to say a massive thank you for playing at our wedding. Everyone has commented how incredible you were! And they're not wrong! You and Lenny worked so well and kept the Party going! Having you play our first dance was simply amazing and can't Thank you enough for making that moment extra special. Had the wedding trailer back and there's some epic clips from the dance floor! A massive Thank you from us both!

Saxophonists in the UK