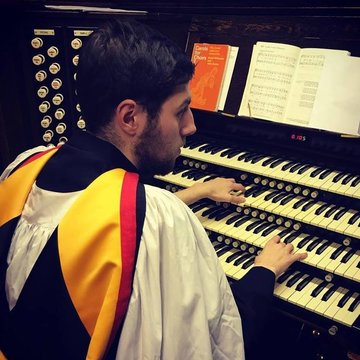 Robert is currently Organist at Our Lady and St. James’ Church, Bangor, an Organist at Capel Berea Newydd Bangor, Musical Director of Lleisiau'r Mynydd, and accompanist to Côr Dre, Caernarfon. He Started his musical career as a chorister at Bangor Cathedral. At the age of 14, he became one of the Organists at St. Mary’s and Christ Church, Llanfairfechan. After which at the age of 16 he was appointed Organ Student at Bangor Cathedral, and held the post alongside singing as a lay clerk in the Cathedral Choir. In September 2013, he won a performance scholarship to study music at Bangor University and studied performance with Graham Eccles, Dr Xenia Pestova, Dr Iwan Llewelyn Jones and Richard Craig, and composition under Dr Owain LLwyd and Prof Pwyll ap Sion. In 2016, he graduated with a BA (Hons) in Music and returned to Bangor University in the same year to start his MMus in performance, which he completed in 2017. In 2017, Robert was made a member of the Orsedd Y Beirdd at the National Eisteddfod in Anglesey. He currently works as Organist of Our Lady and St. James’ Church Bangor, a post he has held since 2014, alongside being an organist at Capel Berea Newydd, Bangor. In November 2017, Robert was also appointed accompanist to Côr Dre in Caernarfon. Alongside this, he works as a performer and teacher, performing regularly in North Wales and beyond.

Thank you Helen. A joy to be part of the wedding!

MJ
Melissa J
4 years ago, for a Birthday party in Buxton SK17

Robert provided an excellent backdrop to my cocktail party and created the perfect atmosphere.

Having Robert play the piano in the foyer as we and our guest walked into our reception was so beautiful and set an ambience to welcome all. Robert's playing was professional and his selection of music fitting for the occasion.