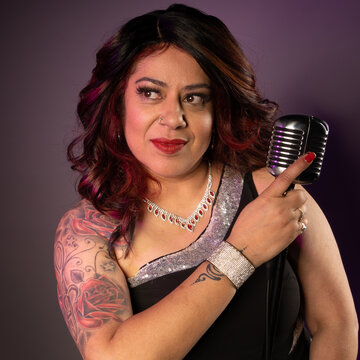 Covering Motown, Soul, Reggae, Ska, Latin Flavours, 60's, 70's, 80's, 90's & 00's Top 40 hits. Including Classic songs like "At Last" Etta James. Also performing song of other female legends such as The Supremes, Amy Winehouse, Tina Turner, Beyonce, Lana Del Ray & Sia. Rita also performs Male Songs from groups like Motown Boy Groups, Madness, The Specials, Dexy's & UB40. 70's hits from groups like, Sister Sledge, Boney M & Abba She also has a little Jazz & Country music. With a repertoire of over 300 songs just as a soloist Not only does she sing with passion, heart and soul she is also a self - taught saxophonist. Alto Saxophone "Suzy" who is never too far away. Rita performs some classic instrumentals on her sax like Baker St, Stranger On The Shore, One Step Beyond, Wonderful Tonight, Will You.............to name a few. Rita was in a band called The Dub Factory which toured all over Europe) and they supported Aswad on their UK Tour in 2000 & performed at St Davids Hall Cardiff. The Empire Theatre in Leeds. Bedworth Civic Hall Rita was also a finalist on Idol 2008 and was selected from over 10,000 auditionees' to represent the West & East Midlands Rita has also worked as a session vocalist her voice was heard in the Outro track of the Common Wealth Games Ceremony 2000. Alongside The Bee Gees voices produced by Wilde Oscar Productions. Invited by Mark Morrison to perform at the WKD Club, Camden Town Collaborated with Mange La Funk (Gusto Records) as a songwriter and vocalist .

Will U Still Love Me
My Guy
Where Did Our Love Go
Baby Love
Keep Me Hanging On
Then He Kissed Me
Do Ron Ron Ron
Heatwave
Be My Baby
Son Of a Preacherman
Valerie
Tears Dry On Their Own
Rehab
You Know I’m No Good
Love Is a Losing Game
Back To Black
Cupid
A Message To You Rudy
Sweet about Me
Mercy
No One
Spotlight
Stepping Stone
Hallelujah
Heaven
Here come The Rain
Frankie
Steamy Windows
Can't Get You Out Of My Head
Venus
Ole Devil Called Love
Don’t It Make My Brown Eyes Blue
We’ve Only Just Begun
Move Over Darling
Simply The Best
Whats Love Got To Do
Riverdeep Mountain High
Dancing In The St
In His Kiss
Gimmie Gimmie
Abba Medly
Upside Down
Perfect
Sweet Dreams
La Isla Bonita
Like A Prayer
Can You Feel It
Sky
Let Me Be Ur Fantasy
Ain't Nobody
Innersmile
Its In Your Eyes
Much Mambo Sway
How Do I Live Dancemix
Need Somebody
Black Velvet
1st Cut Is The Deepest
Get Here
Ur Still The One
Beautiful
Sweetest Taboo
My Luv Is Ur Luv
No No No
Hurt So Good
Smooth Operator
Come See About me
I’m So Excited
Nowhere To Run
Saving All My Love
Monkey Man
My BOY Lollipop
Cupid
Red red wine
Must be love
Tide is high
Hey little rich girl
Your wondering nor
Our day will come
I Just Don’t Want To Be Lonely
Don’t Turn Around
Food For Thought
Don't Break My Heart
At Last
Will You
Echo Beach
Cheap Thrills
Giant
Baker St
Pigbag
One Step Beyond
Night boat To Cairo
Wonderful Tonight
Ain't No Sunshine
Heard It Through The Grapevine
What A Man
Motown Medley
Get Ready
Tracks Of My Tears
B.A.B.Y
Higher & Higher
Redemption Song
Is This Love
Enjoy Yourself
10 Out OF 10
Hit The Road Jack
Stranger On The Shore
Despacito
La Isla Bonita
Much Mambo Sway
And Many More....Always learning new tracks,,,

Yes, Rita and Hubby, done my wedding, and what a cracking supreb day it was👌 5***** star rating all day long xx superb sax player and singer 💗👌

Great Personality and Music. Very talented Singer and saxophonist. I would Definitely recommend her.

My husband and I saw them at our local pub years ago and we though they were absolutely amazing. Since then we have booked them for my daughter's 25th wedding Anniversary. Recently we booked them for our 50th wedding anniversary. They have never yet disappointed us. They suit all ages. especially family do's. They get better and better and we will definitely book them again for other family do's, Highly recommended. Superb.