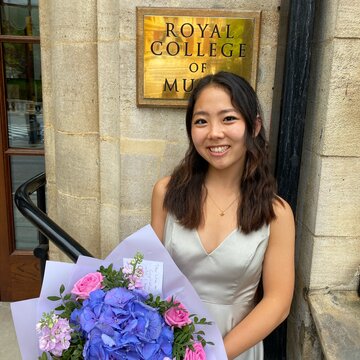 An enthusiastic and friendly ensemble player available for weddings and other functions.
3 of 8 photos
Violinist
Birmingham

Risa Sekine recently finished her Masters Degree at the Royal College of Music London studying with Jan Repko. She obtained a First Class Degree with Honours from the Royal Birmingham Conservatoire, where she studied with Nathaniel Vallois and Oliver Wille on a full scholarship. Having been born into a musical family, she picked up the violin when she was 3 years old and has adored music ever since. She has been a part of various chamber ensembles and orchestras in both Tokyo and Birmingham, which has shaped her love of ensemble playing. During her time in Birmingham, besides various Conservatoire projects, she has played in the CBSO Youth Orchestra- leading the 2nd Violin section in the 2018 course- as well as led the Orchestra of Solihull Schools in Concert as part of an outreach project. She has also played in masterclasses with Professor Richard Deakin, Bin Huang, Professor John Gilbert, and Linus Roth. Risa has been accepted onto the CBSO Training Scheme this academic year and has also taken part in various side-by-side schemes with the Welsh National Opera and Orchestra of the Swan.

Delibes Flower Duet from Lakme,
Wedding March, Schubert Ave Maria,
Pachelbel's Canon,
Firework Music,
Vivaldi's Four Seasons,
Tchaikovsky Selections from The Nutcracker Suite,
Meditation from Thais,
Lange Flower Song,
Gounod Ave Maria,
Leonard Cohen's Hallelujah,
Can You Feel the Love Tonight,
A Whole New World,
I See the Light,
Nearer My God to Thee,
My Heart Will Go On,
Czardas,
Thinking Out Loud,
Perfect,
Photograph,
Lover,
Blank Space,
Love Story,
Enchanted,
All Too Well,
You Belong With Me,
Cardigan,
Wildest Dreams,
All of Me,
Stay With Me,
A Thousand years,
I Won't Give Up,
Say Something,
Rather Be,
Queen selections,
ABBA selections,
Bach Jesu Joy of Man Desiring,
Telemann Six Canonic Sonatas,
Requests of any genre,
Customer questions

I am very friendly and also very accommodating to any requests.

Dance for Ukraine Charity Gala curated by Alina Cojucaru and Ivan Putrov at the London Coliseum with musicians from the English National Opera and Ballet.

I am able to play as part of strings duos, trios and quartets. Please get in touch for further inquiries.

I usually come in about half an hour to an hour prior to the start of the function to set up and warm up.

Yes of course! And if you have any further request, please get in touch and I will try my best to accommodate them.

Yes, I bring in all equipment require to perform.

Yes, if you get in touch with any requests I will try and make arrangements. However if there are any special pieces you'd like for me to learn, I am happy to do this for you. There is a fee of £15 for this service to take into account rehearsal times etc.

A serious and highly talented musician... recommend highly with no reservations.