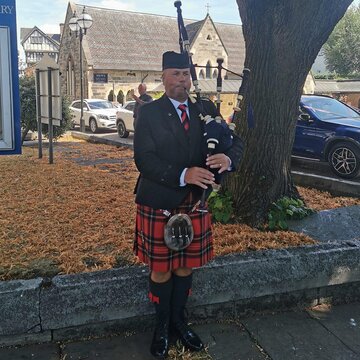 I've been piping since I was 14, I'm 52 now. I play in a competition band at a high level. Can cater for all enquiries.
3 of 21 photos
Bagpiper
Stone
Public liability insurance of £1 million

In my early years I was frequently required to play at many functions of all descriptions. These ranged from family functions to corporate and prestige functions. I appeared on the regional TV news, Radio and newspapers. Have played for many dignitaries including politicians and the royal family. In addition to this I joined a competition pipe band and got promoted to Pipe Major of the band. During that time I managed to get the band to get on the prize list at the European Championships in 1999. Later in 2002 I joined another band at a higher grade. But due to family commitments I ended up having to leave after only a year with them. I spent time away from function work while I raised my family, but I'm back in a position where I can cover all aspects of piping work required. I currently play in a competition pipe band at Grade 2 (the only English pipe band in that grade) and have competed in solo competitions too. This was I find it keeps your playing at its best at all times. I have sound files to show my playing but not allowing me to uplaod them as m4a files. Please contact me should wish you hear them I can can send them to you via email or whatsapp

Great individual gig, captivating showman and well performed, thanks for the bag pipes

Due to lockdown there was lot of communication on the arrangement of funeral plans and how Richard would fit in. the communication was seamless. Richard accepted all requests of song choices and also gave me some recommendations which i took on and really marked the occasion. Richard led the hearse and played every note flawlessly and the transition of songs was brilliant. Overall perfect from start to finish from songs to execution, leading the hearse, smartly dressed. Proffesional from start to finish. Everyone commented on the piper afterwards on how good he was. I never got to say for lockdown restrictions and overwhelmed on the day So big thankyou Richardfor making the day and giving my father the best send off he could. If your in doubt of a piper look no further.

Richard was an absolute professional, he provided my father with the best send off. Everybody commented on how good he was. I cannot thank him enough.

Regarding your piping services for our Burns Night last Saturday 28th January 2017. Me and Amy wanted to drop you an email to say thank you very much for performing on Saturday evening. I know you've had a bit of a break from playing events, but we would like to say how much of a professional you were (even standing outside on a cold, wintry evening).

I would like to thank Richard for his piping services during our Rememberance Service here in Knutsford/Tatton. I would like to say how impressed we were to find his professionism in his appearance, instrument and playing throughout the whole Parade. George Osbourne MP was also in attendance and he additionally praised Richard with his appearance and playing. Thank you for your services, we shall be in touch again should we require a piper.