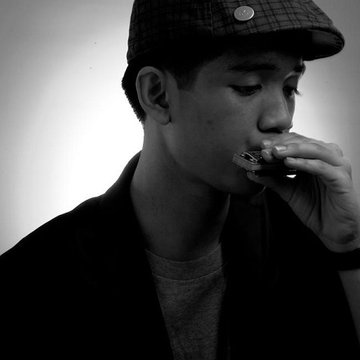 Born in Jakarta, Indonesia in 1997, Reyharp or Reyhan Naufal is one of the young shooting stars emerging on the contemporary harmonica scene. Reyharp plays blues and jazz on the diatonic harp with a maturity and assurance which belies his years and astonished listeners at the prestigious Asia Pacific Harmonica Festival 2012, where he won the diatonic contest in the face of stiff competition.Reyharp is a promising man in harmonica world. He first started playing harmonica when he chanced upon a HOHNER Blues Harp, lying in his uncle's cupboard. The unique form of the little instrument exerted a powerful fascination on the young Reyharp and he felt instantly drawn to it. He soon started learning to play the blues with his uncle as well as developing his musical talents by studying jazz on his own. Reyharp proved to be a quick learner and he now plays the diatonic harmonica chromatically through the use of controlled bending and overbending. Despite his youth, he has already gathered considerable musical experience and has performed numerous live gigs as well as appearing on concert stages and winning several awards, local and international. Reyharp was very like to all kinds of music. He played all kinds of jazz styles,such as swing,be bop,latin,and contemporary styles. He also endorsed by the largest harmonica company in the world,Hohner Harmonica, which he became the youngest endorseen 2014, Reyharp made his first international recording in Melbourne, Australia with some musicians from Melbourne Conservatory. Reyharp has been performed in numerous of prestigious events in Indonesia, Singapore, Malaysia, Australia, Netherlands, Germany, United Kingdom, etc. Reyharp has been performed with some of the finest jazz musicians, such as 14 years old grammy nominee Joey Alexander Sila, Benny Likumahuwa, Balawan, Oele Pattiselano, Indro Harjodikoro, Tohpati Ario, and so many more. Reyharp also performed with some Internationally acclaimed harmonicists such as Brendan Power, Jens Bunge, Konstantin Reinfeld, Mingo Balaguer, Marcos Coll, etc.

Rey.. What an absolute performance !! Guys.. you should see his outstanding harmonica stuffs