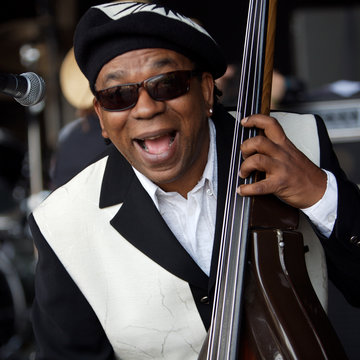 Rey Crespo & Cuban Ensemble is considered to be one of London finest in Modern Latin Jazz, Salsa, Afro Cuban and Cuba Music.

Rey Crespo was born in Havana, Cuba in 1954. His encounter with music began with the guitar at the age of 10. Later in university, he finished his degree in Archaeology and Architecture, but it was in 1964 when he fully started to develop his real passion in life at the Alejandro Garcia Caturla School, where he studied Guitar, Singing and Music Appreciation. He went on to the Ignacio Cervantes School, where he graduated in Electric Bass, Double Bass, Harmony Counterpoint, Fugue and Orchestration. At the Felix Varela School, he studied Musical Direction and Orchestration with Armando Romeu, a graduate of the Berklee College of Music. Rey had participated as arranger and producer with outstanding musicians such as: HilarioDuran, Demetrio Muniz, Ruben Gonzales, Orlando Lopez (Cachaito) and Lazaro Valdez (Bamboleo), Jesus Alemany( Cubanismo ). Rey continuos working in the England to doing arranger, producer, ect... also he's a musical director and bassplayer The Ska Cubano band, his owned band that called Cuban Ensemble

Yes, We can reduce the band till 4 pieces.

Not more than a day preferred

Yes, I'm work with many of them

Yes, of course, that is not problem.

IsNot, we need planning what do you want in your venue and the fee can variable so dependent how many guest and the size of your Venue.

Of course, We are a profeassional musician with high level in music.

Any client that guet us respet and they are polite and understand our perfonce also enjoy and have fun time with us.

my influence is more from Cuba but I love the Bob Marley, Carlos Jobim, Earth, Wind and Fire and many more.

The Womad Festv in Australia

“I just wanted to email to say how amazing you were at the fairmont last night I thoroughly enjoyed myself. Your band is fantastic, was never of the floor. I would love to see you again. Thanks for a good night “

VB
Vinil B
5 years ago

Thank you all so so much. The feedback for you guys has been great and everyone is hailing this years’ as the “best one ever”