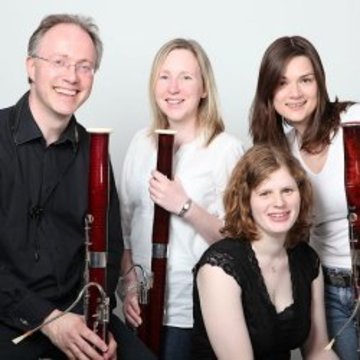 Check availability and get a free quote now - no commitment to book
From£640
Watch & Listen
About
Home page
Reed Rage
Like Reed Rage?
Watch & Listen
1-3 of 5 videos

London
An engaging and innovative quartet of bassoonists who enjoy sharing the unique and wonderful soundworld of these enigmatic instruments.

In early 2009, four friendly bassoonists gathered together to while away a windy evening exploring some bassoon quartet repertoire. The burbling sound of four bassoons proved so enjoyable that Reed Rage was born, and the quartet made its debut at Burgh House in Hampstead later that year. Since then, Reed Rage has been delighting audiences around the country, and is available for recitals, events and education work. With a wide range of repertoire, Reed Rage is an ideal group to hire for a variety of events, adding an extra dimension. A full length recital programme of dedicated Rage antics is the preferred presentation and is guaranteed to delight and amuse your audience. But whatever the occasion Reed Rage can help you create a unique event. In the educational area, Rage has a key role in promoting the fun of playing the bassoon to the next generation. As the bassoon is still listed as "endangered" we have work to be done. With many children as young as eight or nine years old now able to start learning on a mini bassoon or tenoroon this is a great age to introduce Reed Rage into a classroom situation. "The bassoon is one of my favourite instruments. It has the medieval aroma, like the days when everything used to sound like that. Some people crave baseball . . . I find this unfathomable, but I can easily understand why a person could get excited about playing a bassoon. It's a great noise - nothing else makes that noise" Frank Zappa Definition: Reed Rage. An affliction commonly found in double reed players, especially bassoonists. Less serious than Reed Neurosis suffered by oboe players. It involves leaping up and down on reeds that don't work or stabbing them into music stands. rage: [with modifier] an instance of aggressive behavior or violent anger caused by a stressful or frustrating situation : e.g.reed rage ORIGIN Middle English (also in the sense [madness] ): from Old Frenchrage (noun), rager (verb), from a variant of Latin rabies (see rabies ). "Sumptuous reedy sounds: ensemble playing to die for: and a fun programme. Add all these together and you have a Fab Four called Reed Rage – a quartet of bassoonists who, it seems, can play anything." S.K.