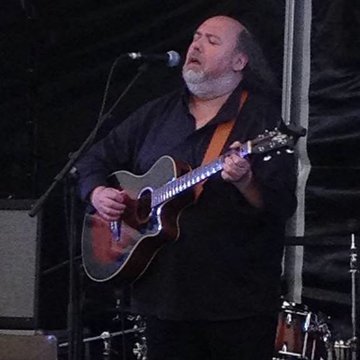 A short, edited biog! Raymie has been playing and writing songs and original music for over 40 years. Starting off jamming with mates in bands whilst at school, and playing in night clubs and bars with his Dad, Joe. (Illegally)! Then playing in full time rock bands by the age of 17. After 9 years of touring and recording with various rock outfits, he took a peripatetic teaching job in the Southside of Glasgow, which lasted for 2 years. After attending a Musicians’ Union branch meeting he got talking to someone who was looking for a guitarist and singer for a cruise ship contract. He jumped at the offer of a gig at sea, and ended up working various contracts over the next few years as well as doing other gigs in-­‐between. A couple of years later he was contacted by Neil McCormack, owner of the legendary Glasgow family-­‐ run music store “McCormack’s”, and was asked if he could play bass for a Hendrix Tribute guy, Jim Dunlop had brought over from the States. This turned out to be another change of direction, and he started playing with The Randy Hansen Band. Mainly playing Hendrix covers at trade shows etc.. On the way back from a trade show, while passing through London, he found out that Royal Caribbean Cruise Lines were auditioning musicians for possible positions aboard ships. After a successful audition he found himself at sea once again, working as a guitarist, and backing big Vegas-­‐style shows and cabaret acts such as Al Martino, Tony Bennett, Petula Clark, et al.. After a few years and many ship board contracts he got a call and found himself working at Butlins’ holiday camp in Ayr. “Work’s work”. There he met an agent who asked him if he could do a gig in Singapore with “The Legendary Ladies of Rock ’n’ Roll? So off he went and played with, “the Shirelles”, “the Chrystals” and “the Supremes”. On returning to his native Glasgow, yet again, he took up an offer of resident musician for the Pavilion Theatre. For the next 5 years he would play guitar or bass for all the original in-­‐house productions, and some touring shows. Things turned again and after being contacted by a London-­‐based agency, at short notice, to dep for a guitarist on a ship for a few weeks, he ended up working for the next 6 years as guitarist and Musical Director for the company. After a short spell helping to look after his Father, who had became ill. He got the guitar chair gig on the touring production of “Joseph and the Technicolour Dreamcoat”. Almost 2 and a half thousand shows later, he said goodbye to life on the road...................Well at least for a couple of years! He has, since then, played on a few touring shows, but says he’s definitely done enough of them now. The last show he toured with was the UK and Ireland tour of, “7 Brides for 7 Brothers”, on Banjo, and some guitar. Through all this time, he would be constantly jotting down lyrics in notepads and scribbling down music and recording pieces of songs and other musical ideas on whatever he had at his disposal. A few years ago, he issued the instrumental album, “2012”, followed by the EP, “4x4”. Which contained 4 original songs in the Americana vein. Toward the end of 2014 he issued the album, “Weather Permitting”, a collection of 8 songs, all with a story to tell, initially folky then getting heavier and rockier as the album progresses. As always he performed all the instrumentation and vocals, and recorded, engineered and produced all the tracks. In February 2016 he issued an album of original music selections he had written for the Marc Pye play, “Getting Ahead”. Mid 2016 he was approached by folk singer Charlie Harrigan, to lend a helping hand with a new recording. To, “Raymiefy it”, as Charlie put it. So; a washtub bass, tuba, hurdy-­‐gurdy, vihuela and a Burmese temple bell later, “Morning Train’ was done. At this time, Raymie is writing and recording various projects including; a new country album, a rock guitar album, a few power pop songs, a prog concept album, and a first series of a children’s cartoon. He has also recently self-­‐published a book of Classical Guitar pieces, which were originally written whilst teaching in the 1980s.

Behind Closed Doors,
Bye Bye Love,
Copperhead Road,
Crocodile Shoes,
Dance the Night Away,
Desperado,
Fisherman's Blues,
Folsom Prison Blues,
Gambler,
Great Balls of Fire,
Help Me Make It Thru' the Night,
I Recall A Gypsy Woman,
Little Old Wine Drinker Me,
Lyin' Eyes, Me & Bobby McGhee,
Red Rose Cafe, Ruby,
Wagon Wheel. 1
0/10,
2 Out of 3 Ain't Bad,
Bat Out of Hell,
Brown Eyed Girl,
Cracklin' Rosie,
Crocodile Rock,
Daniel,
Delilah,
Don't Stop Believin',
Dreadlock Holiday,
Hot Love,
I'll Be Your Baby Tonight,
It Stoned Me,
La Vida Loca,
Lola,
Maggie May,
Norwegian Wood,
Proud Mary,
Valerie,
All Night Long,
Can't Take My Eyes Off Of You,
Disco Inferno,
Everyone's A Winner,
In The Midnight Hour,
Love Is In The Air, Mustang Sally,
Nutbush City Limits,
Proud Mary,
River Deep Mountain High,
Sitting On The Dock Of The Bay,
Spanish Harlem,
Summer Breeze,
Under The Boardwalk,
You Are The Sunshine Of My Life,
Bad Bad Leroy Brown,
Fly Me To The Moon,
I Left My Heart In San Fransisco,
Just A Gigolo,
Mack The Knife,
Moondance,
New York New York,
That's Amore,
The Lady Is A Tramp,
Addicted To Love,
Always On My Mind,
Amarillo, Angels,
Answer To Everything,
Babe,
Bad Moon Rising,
Boot Scootin' Boogie,
Bridge Over Troubled Water,
Brown Sugar,
Burning Love,
Come Monday,
Country Roads,
Crazy Little Thing Called Love,
Crazy,
Crying In The Rain,
Daydream Believer,
December '63,
Don't Let The Sun Go Down On Me,
Don't Look Back In Anger,
Down Under,
Easy,
Elvira,
Fiesta,
Follow You Follow Me,
Get It On,
Greased Lightning,
Handbags And Gladrags,
He Ain;t Heavy,
I Am I Said,
I Can See Clearly,
I Feel Good,
I Just Called To Say I Love You,
I've Got The Music In Me,
Impossible Dream,
In The Summertime,
Jambalaya,
Just The Way You Are,
King Of The Road,
Knock Three Times,
Life On Mars,
Living Next Door To Alice,
Love Me Do,
Love On The Rocks,
Lovesick Blues,
Margaritaville,
My Life,
Oh! Pretty Woman,
One Of Us,
Ring Of Fire,
Rocket Man,
She Wears My Ring,
Shooting Star,
Sledgehammer,
Sorrow,
Space Oddity,
Spirit In The Sky,
Stand By Me,
Summer Of '69,
Suspicious Minds,
Sweet Caroline,
Sweet Home Alabama,
Take It Easy,
The Air That I Breathe,
The Most Beautiful Girl In the World,
The River,
The Walk Of Life,
The Weight,
This Masquerade,
Tom Traubert's Blues,
White Wedding,
Will You,
Without You,
Ziggy Stardust.
Customer questions

Not usually a problem. Sometimes things happen and things like times need to be changed. Get in touch asap and we'll sort it out.

Yes. if you need this, please let me know what types/genres of music you would like. I can usually sort something out. If however, you would like music after my sets, then I would need an additional fee. Which would be negotiable.

I don't use a lot of equipment, so generally it takes me 10 to 20 minutes to set up and sound check. Usually shorter.

I don't work from set lists. Usually I will start with a song that I feel most of the company will know, and gauge the rest of my sets from there. I always try my utmost to read the audience. If you have any specific songs you would like me to play, just ask me and I will try to accommodate.

Yes. Whether it's just an acoustic guitar or with tracks and a PA.

Usually I will be able to learn specific pieces if required. Though I may charge a small prep fee for the rehearsal time.

The way I can read audiences and adjust the set accordingly.

Too many to mention. I've been performing for a long time.

To be honest I am influenced by most things I hear and see. Life - generally.

Verified
David B, 2 years ago

Hi Raymie Really appreciated tonight, absolutely first class, I hope you will be available to come back to our club! Appreciate everything you have done for us. I have posted something on our page, and added your details to it as we would really recommend you! Like I said hope to see you again really soon, and thank you! Regards David ".

I booked Raymie to perform for a small intimate party I was having for a group of friends. He was excellent in his choice of songs. bang on for the age group there. I would reccomend him to anyone looking for entertainment. Amazing voice and great patter. brilliant night. Cheers Aileen.

"I asked Raymie to play at my 60th birthday party. He was very entertaing all night and had the floor filled with people dancing and singing along to all his tunes. We couldn't believe the sheer vastness of his repertoire. Definitely book him again. Thanks for a great night. Maggie + family"

I asked Raymie to play at my 60th birthday party. He was very entertaing all night and had the floor filled with people dancing and singing along to all his tunes. We couldn't believe the sheer vastness of his repertoire. Definitely book him again. Thanks for a great night. Maggie + family

Thanks for playing at out function at the Burgh Halls on Friday. Everyone is still talking about you. Couldn't believe you played non stop for over 3 hours and had the floor filled all that time. Hope to book you again soon. Margaret.

Thanks for the great night you gave us for me and my Sister's 60th birthday party. Great night had by all. John