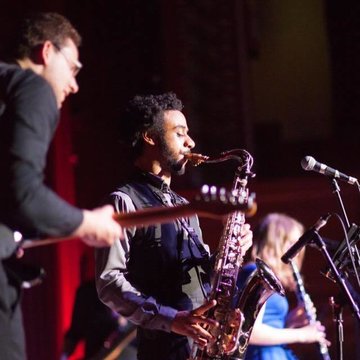 Radio Pachuco came into being in 2011 as the house band for Saturnalia cabaret, an ill-fated production involving some of Scotland’s greatest performers. Since then the band have become increasingly busy, performing regularly at clubs, bars, weddings and other functions across central Scotland. The original plan for Radio Pachuco was to play a classic set of swing and jazz standards, however as time progressed the group have expanded their repertoire to include a large selection of 1950’s music, modern songs in a vintage style and movie themes. Inspired by the internet sensation Postmodern-jukebox, Radio Pachuco have both covered and arranged a large number of modern songs in vintage swing style. The popularity of this “modern-swing” has seen the band perform at the Corn Exchange, Edinburgh International Conference Centre and as the house band for the premier of Hyena at the Edinburgh International Film Festival. Their lively set has something for everyone to enjoy – whether you are looking for the classics of Benny Goodman, the guitar solos of Chuck Berry or perhaps, the unlikely swing covers of a cheesy 90s favourite!

HR
Helen R
3 years ago, for a Wedding in 134 Corstorphine Rd

A huge thank you to all for the fantastic music at Jess and John’s wedding on Saturday. Everybody loved you - my dad of 92 said it took him right back ... in a very good way! There is nothing like live music to get people on the dance floor so I hope we did you proud! It was a wonderful day and we are very happy that you were part of it!

Radio Pachuco were an absolute joy to work with at Charlotte and Sean’s wedding. They were very professional and easy to communicate with, as well as being very accommodating. Their performance was excellent, they are all amazing musicians and had a perfect set list that appealed to the enthusiastic and varied audience. We are very much looking forward to working with them again – it was a pleasure!