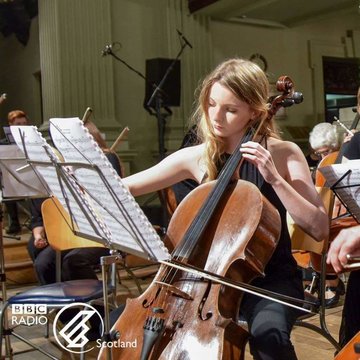 Rachel is a graduate from the Royal Conservatoire of Scotland. She is now a freelance cellist and instructor
3 of 12 photos
Cellist
Glasgow
Verified profile

Rachel graduated from Royal Conservatoire of Scotland with a Bachelors degree in music performance. She is a versatile player and works as a freelance musician and educator. She has previously performed as a concerto soloist with Perth Youth Orchestra and as a member of the National Youth Orchestra of Scotland, NYOS Futures, Edinburgh Contemporary Music Ensemble, Edinburgh Incidental Orchestra, Latitude Symphony Orchestra, Glasgow Philharmonia, Said Ensemble, Cadenza, Glasgow Studio Orchestra, Tinderbox Orchestra and The Nevis Ensemble. She was part of the band for Pitlochry Theatre's production of The Wizard of Oz, for Paisley Musical and Operatic Society's production of My Fair Lady at The King's Theatre and Clydebank Musical Society's recent production of Oliver. She frequently works as a session musician for singer songwriters and pop groups including Seafret, De Rosa, Calum Frame, Reverieme (Louise Connell), Greenback, Hector Bizerk, Kinbrae, JJ Gilmour, Pronto Mama, Monoganon, Urvanovic, Supa & Da Kryptonites, and Fat-Suit. She has played in various chamber groups and attended the Cadenza Summer Music course and currently working on chamber music with a pianist and also as part of a viola and cello duo. Rachel's journey into folk music began at the Alasdair Fraser fiddle course on Skye and she has gone on to play as part of a "top class backing band" with Patsy Reid and Ross Ainslie and now enjoys playing in weekly Scandinavian folk music sessions in Glasgow. On her 2014 trip to India she played at the Strings of the World Festival in Gurgaon and in 2015 she worked as a cellist in a string quartet on a cruise ship to the Carribbean. She has played in masterclasses with Peter Wispelway, Ursula Smith, Erkki Lahesmaa and Su-a Lee. She is an instrumental music instructor for South Lanarkshire and Renfrewshire councils and has previously been a Lower Strings instructor for East Lothian, Edinburgh and Inverclyde councils.

We are so lucky for Rachel to play at our elopement! She was so wonderful, very clear communication, and made the day extra special. Highly recommended!

Rachel played at our wedding in December 2020 and was wonderful, we cannot thank her enough.

Rachel was exactly what we were looking for for our wedding - beautiful music to help welcome our guests and accompany our ceremony. Rachel was easy to work with, great at keeping in contact, and on the day was punctual, professional, friendly, adapted as needed during the ceremony and her playing was beautiful. We received so many compliments from our guests. Thanks for adding to our special day!

Rachel was brilliant. Nailed the written parts quickly which left loads of time to improvise and write better parts which improved the songs.