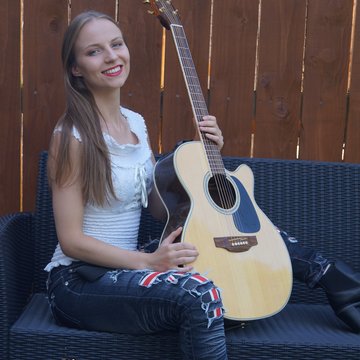 -Singing and Guitar-
-Covers-
Nothing Breaks Like a Heart - Mark Ronson and Miley Cyrus
Jolene - Dolly Parton
Stay stay stay - Taylor Swift
How you remind me - Nickleback
Zombie- The Cranberries
The A team - Ed Sheeran
Royals - Lorde
Baby - Justin Bieber
Let her go - Passenger
Riptide - Vance Joy
Tim McGraw - Taylor Swift
Falling Slowly - from the musical Once
Little Lion Man - Mumford and Sons
Sunday Girl - Blondie
Good Riddance (Time of your life) - Greenday
Ironic - Alanis Morissette
We are never ever getting back together - Taylor Swift
Super Trouper - ABBA
Country Roads - John Denver
Torn - Natalie Imbruglia
-Holiday songs-
Auld Lang Syne
Rudolph
Frosty
White Christmas
Last Christmas - Wham!
Mistletoe - Justin Bieber
-Originals-
Being in love with you
That kiss meant nothing to me
Bruises
Do you feel the same?
Out of sight
Waiting for my love to come to me
I don’t need you to be happy
Can anybody hear me?
Plastic Wrap
Walrus
Customer questions

Give me a call if you have changed the time so I can make sure I am still able to get to you so your event runs smoothly.

You can bluetooth your phone to my PA or provide me with a Spotify list of songs, or I can set Spotify to a reccomended songs mix if you give me a few songs you like.

I arrive about 40 minutes before the time I start to play, and it takes me about 30 minutes to set up all the equipment, and sound check.

Yes- give me at least 2 weeks if I have never heard it before.

Rachel put on a wonderful performance, could not have asked for more than what she already brought to our event, would highly recommend

Thank you so much for today. You have such an amazing voice and your performance was brilliant. It was a pleasure to have you at Hang Out.

Very talented singer/guitarist with amazing covers and beautiful original pieces. Thank you for making our mad party extra special Rachel! Not only a brilliant musician but a wonderful personality which just made the performance even better. I’m sure you’ll go far and we’ll be seeing more of you in the future.

Verified
Sue B, 10 months ago

An amazing set from Rachel Makena we really hope she comes back next year - Folk in the Field, 2019

Verified
Rick I, 1 year ago

Rachel is an excellent session singer for recording projects, with the highest levels of professionalism and talent in the recording studio. She thoroughly familiarised herself with the demo tracks in advance and rehearsed to ensure that the studio time was utilised productively and efficiently. As a songwriter herself she is also able to provide invaluable creative input when required.

Verified
Rick I, 1 year ago

Reviewed by Richard Ingham, Sponsorship & Promotions Manager, Viking FM - Rachel is a captivating and versatile artist which we at Viking FM have featured at a diverse range of events. She is as comfortable performing in front of an intimate crowd as she is in front of hundreds. We have often given Rachel a challenge, whether it is performing an originals set, a covers set, a Christmas set or even performing with a live band which she hadn't met until she stepped on stage! Rachel has performed at many Viking FM events and has always wowed the crowds, including a performance in front of over 500 listeners when she starred on our All At Sea ferry trip to Amsterdam.

‘Rachel Makena is a wonderful musician who has a bright and wonderful sound, we absolutely love her on Not Another Folk Show ‘

‘At KCFM, we shine the spotlight on local unsigned musicians every week by playing one of their songs on a Sunday afternoon. There is so much great local talent in East Yorkshire and Rachel’s song caught our ear. It fit perfectly.’

Singers in the UK
Singers in Hull
Singers in York
Singers in Scarborough
Singers in Doncaster
Singers in North Yorkshire
Company
Discover
Download
Join us on
© Encore Technologies, Ltd.
Crafted with bagels and in London