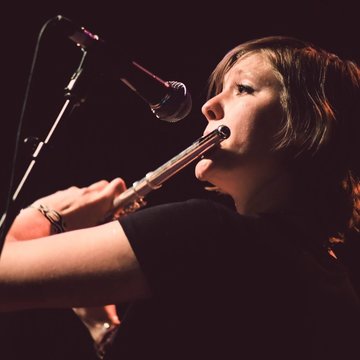 Rachel is a versatile flute player based in London who specialises in Latin American music.
3 of 3 photos
Flautist
London
Public liability insurance of £10 million
Verified profile

Rachel Hayter is a flautist and composer from London with experience performing, leading projects and teaching music in the UK and abroad. After studying classical flute, she branched out into Brazilian and world music. She performs regularly with Brazilian choro band 'Alvorada', who recently released their debut album 'First Light' (5* Songlines). She also performs freelance in a number of genres including Brazilian/Latin American music, UK folk and jazz. Rachel has performed in London venues such as Kings Place, Milton Court, the Vortex, the Forge and Rich Mix, as well in a number of festivals nationally and internationally. Rachel also plays Brazilian music for Live Music Now, leading interactive performances and workshops in care homes and schools. Rachel has a Masters from the Guildhall School of Music and an undergraduate degree from Birmingham University, where she studied Spanish, Portuguese and Music. She spent a year studying the flute at the Conservatorio Nacional Astor Piazzolla in Buenos Aires as part of her degree. Since graduating, she spent a year in Brazil studying Brazilian music, performing and leading community music projects.

Having lived in Rio de Janeiro for many years and being really into live music I’ve heard a lot of choro music in my time and I can honestly say Alvorada comes out there right on top. It doesn’t seem to matter that some of the band are not Brazilian; they all play with supreme talent and an infectious, authentic Brazilian style which just makes you want to get up and dance. A few months ago we had the pleasure of having them here in London at an enormously successful Florence Latin Jazz house concert. It will definitely not be the last time.

Verified
Alan B, 3 years ago

I was about to experience another birthday with a nought on the end and a party seemed the appropriate way to acknowledge another of life’s landmark dates. A party needs focus and a good band would provide it. The grapevine produced the notion of booking 5 piece Latino outfit Alvorada and I couldn’t have chosen better musical entertainment for the occasion. They are a five piece outfit of great musicians with strong melody interplay between Rachel Hayter’s fluent flute and Andrew Woolf’s dexterous clarinet. Their fellow musicians all play slightly obscure instruments (resembling tambourine, ukulele and a guitar with a weird number of strings) providing fabulous rhythms. So whilst the band are a terrific listen and produce a refreshing and original musical experience, they also almost inevitably invite an unstoppable dance reaction. On a practical level Alvorada were friendly, cooperative and professional and set up with the minimum of fuss. They were the highlight of the evening and I would fully recommend them for all kinds of bookings.

Verified
Madeleine B, 4 years ago

I couldn’t recommend Rachel enough. Her performance at my wedding was exactly what I had envisioned for the day. She played cheerfully and with personality, but with true professionalism. What struck me most about Rachel was her ability to play the range of songs I had asked for effortlessly and beautifully. Rachel is friendly, approachable and professional but most importantly, the guests loved her and the fun, celebratory atmosphere she created after the ceremony.