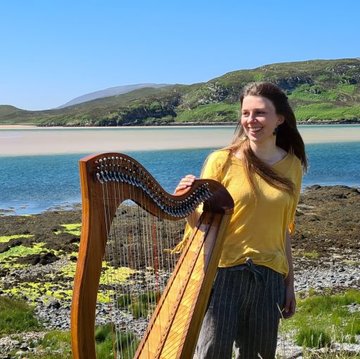 Edinburgh based harpist and recent music graduate available for weddings and other events in Scotland.

I grew up in Aberdeenshire, and began playing the harp aged eleven. I fell in love with the instrument straight away! In 2021 I graduated from University of Edinburgh with a first class degree in music. I love playing and sharing music with others, and will to help make your day personal and special. I have several years of experience playing at weddings, funerals, functions and other events around Aberdeen and Edinburgh. My repertoire includes folk, popular and classical songs. Because each event is unique, I am always open to hearing your own ideas for the day and learning new songs. For weddings, I am also able to compose a piece of harp music, which can be played at some point during the ceremony. Aside from performing at weddings, events and other gigs, I've been fortunate to perform in and lead various music groups. While living in Aberdeen I led the Christmas concert 'Harps of Gold' and at university, I was Musical Director of the a capella group Shirley Tempos. I have also played with groups such as the Clarsach Society, at RCS Junior Conservatoire, and at international folk music camps and festivals. I had the chance to perform solo recitals at the Wymondham Music Festival in 2017 and the Edinburgh Harp Festival in 2019. I also enjoy composing music, and have won awards including the Times Carol Competition, Clarsach Society’s Young Composer Award and the Emre Araci competition for Edinburgh University String Orchestra. I have also had the opportunity to write music for the Aberdeen Harp Project and the Edinburgh University Composer’s Orchestra.

Here are just a few songs I enjoy playing! I'm always happy to learn music if you something in mind, and I can also compose something especially for your day.
Folk Music
Amazing Grace
Auld Lang Syne
Greensleeves
Marie’s Wedding
My Love is Like a Red Red Rose
The Parting Glass
Scarborough Fair
Skye Boat Song
Wild Mountain Thyme
And many more traditional airs and dance tunes...
Pop/Film Music
A Thousand Years – Christina Perri
All of Me – John Legend
Tale As Old As Time Beauty and the Beast
Clocks - Coldplay
Everything – Michael Bublé
Fly Me To The Moon- Frank Sinatra
Hallelujah - Leonard Cohen
Here Comes the Sun – The Beatles
Moon River - Henry Mancini
My Heart Will Go On – Titanic
The Prayer - Céline Dion
Somewhere Over The Rainbow – Wizard of Oz
Classical
Canon in D - Pachelbel
Here Comes The Bride - Wagner
Ode to Joy - Beethoven
Wedding March - Mendelsohn

We hired Rachel for our wedding and it was beautiful! The harp is such a special instrument and it suited the intimate setting perfectly. On top of that, Rachel went the extra mile in arranging a set list that matched the setting and atmosphere. Having Rachel at our wedding made the day that much more special. We couldn’t recommend her highly enough!

Rachel played at our wedding ceremony in August 2020. She was very accommodating to our requests, while also being comfortable to make decisions when we were overwhelmed with wedding planning! She even composed an original piece for the entrance of the bride; it felt so personal and represented both of us so well! The performance was beautiful and our guests commented on how special it made the day feel. Being a covid wedding, there were a lot of things that didn't go as we had originally planned, but asking Rachel to play the harp for us was definitely not a regret! We cannot recommend her more highly and are so thankful for her performance at our wedding.

Celtic Harpists in the UK