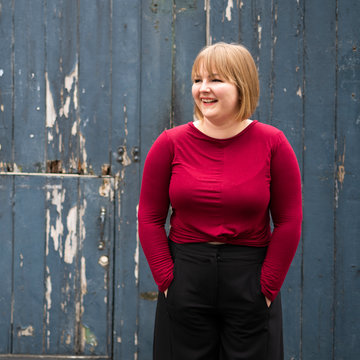 Let Rachael help you create the perfect atmosphere for your event, whatever the occasion.

Rachael is a British mezzo soprano, and alumni of Leeds College of Music (2016). She graduated with a first class honours degree in classical vocal performance, and currently studies under the tutelage of Julie Kennard. After receiveing the Gold Award for English Word and Song, following success at the David Clover Festival of Singing - Singers’ Platform (2017), Rachael appeared with Northern Opera Group as Armelinde, in their 2016 production of Pauline Viardot’s Cendrillon. This was followed by an appearance with Aspect Opera in July 2017 for their production of Albert Herring by Benjamin Britten, performing the role of Mrs Herring (also performed at the Left Bank Opera Festival, in collaboration with Northern Opera Group); and a performance with the Leodian Concert Orchestra in a production of Vaughan Williams' Riders To The Sea as Maurya. She was also invited to sing at Leeds Lieder Festival at the Composer’s and Poet’s Showcase in April 2017. Rachael was invited to sing with British Youth Opera, and followed this with her European debut at the Veneto Operaestate Festival, Italy, with the Melofonetica Summer School in August 2017. During her studies at Leeds College of Music, Rachael was selected for the Margaret Markland Choral Scholarship, leading to many performances with The Yorkshire Philharmonic Choir. Rachael took on various roles, including 2nd Witch in Dido and Aeneas (2015) and Lay Sister in Suor Angelica (2016). She has been involved in various workshops and masterclasses, leading to her working with the likes of Mary King, Maitland Peters, Chris Glynn, Alison Pearce and Paul Phoenix. In August 2015, Rachael successfully auditioned for The National Youth Music Theatre, originating the role of Jennifer in the critically acclaimed new musical Prodigy (Brunger and Cleary). This was first performed at St James’s Theatre, London, followed by a showcase of scenes at the NYMT 40th Anniversary concert at The Adelphi Theatre, London. Rachael has also been involved with Leeds Arts Centre, taking on the role of Ivy Randle in JB Priestly’s The Rose and Crown in April 2017. She was also asked to join 80’s icon Marc Almond for two performances in July 2016 at Leeds Town Hall and The Royal Festival Hall.

Below is a list of sample repertoire. This is by no means an exhaustive list - Rachael is happy to learn new songs for your event.
Classical/Musical Theatre:
Du Bist Wie Eine Blume - Schumann
Widmung - Schumann
Non So Piu, Cosa Son - Mozart
O Mio Babbino Caro - Puccini
Ave Maria - Schubert
Panis Angelicus - Franck
You'll Never Walk Alone - Rogers and Hammerstein
Can You Feel The Love Tonight - The Lion King
Candle On The Water - Pete's Dragon
Some Kind Of Wonderful - Beautiful
Tonight - West Side Story
Jazz/Pop (performed in a classical style):
Fly Me To The Moon - Bart Howard
Can't Help Falling in Love - Elvis Presley
At Last - Etta James
Marry Me - Bruno Mars
A Thousand Years - Christina Perri
I'm Yours - Jason Mraz
How Long Will I Love You - Ellie Goulding
Don't Stop Believing - The Journey
Perfect - Ed Sheeran
My Way - Frank Sinatra
Nothing Compares to You - Sinead O’Connor
You Raise Me Up - Secret Garden/Westlife
Dance With My Father – Luther Vandross
Customer questions

I understand that things often change in the run up to an event, so I try my best to be flexible to help ensure your event runs smoothly. If timings change just let me know! Where possible 7 days notice is appreciated.

I don't provide this as a service, but I would be more than happy to help find a trusted musician who does offer this service!

Generally I like to set up and have a quick sound check an hour before guests begin to arrive. This usually takes no longer than 20 minutes when using backing tracks, or 30 minutes if performing with other musicians.

Absolutely. I am happy to perform well known favourites as well as learn new music specific to your event. Throughout the process I will be available to help create the perfect programme for your event.

If performing with backing tracks, yes - all I will need is a power supply. When performing with a pianist, a piano or keyboard (with a sustain pedal) may need to be provided. This is something I can confirm once a pianist is booked.

If a song is not already on the set list, there may still be a chance I already know it! But in order to make sure your event is unique, I am happy to learn new pieces. If new songs are added to the set list with less than 7 days to go before the event, there may be a fee of £30 to take into account rehearsal time etc.

Standard Prices
All prices include:A Skype consultation Regular contact throughout the process A tailor made programme for your event All music/backing track costs

Verified
Marcus B, 2 years ago

I have been working with Rachael Cawte now for almost four years. As a professional, Rachael is confident, competent and highly committed. Any opportunity to gain experience and progress her professional development further, Rachael will take it and give it her full dedication. Rachael has a very strong passion for her craft and is constantly prepared and eager to perform whenever she can. In a rehearsal, Rachael always comes prepared; she is punctual and will face up to any challenges that could potentially arise. I have no hesitation in providing Rachael with a reference; I know she will be asset to whatever she puts her mind to.

Earlier this year Rachael sang as part of the Bristol Song Recital Series, in our city centre location. She was easy to work with, efficient and clear in her communications and responsive in her planning, and arrived on time and well prepared for the rehearsal and performance. The performance was excellent, with a programme selected to suit the audience, the concert length and the brief. Rachael also spoke very engagingly to the audience.

Rachael really wowed all the crowd - fabulous night and definitely one to remember!

What a treat - beautiful voice and great entertainment

Singers in the UK
Singer (mezzo soprano)s in the UK