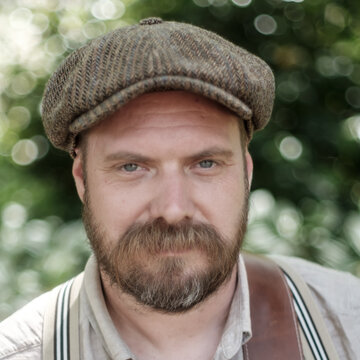 They say the blues is as much an attitude as it is a music. In the acoustic songcraft of Pistol Pete Wearn, the raw holler of the blues is given an English inflection, as if RL Burnside has returned to us with the express intention of ripping up the shires. On Wearn's new album, Service Station Coffee, the well-travelled troubador documents his rip-roaring live shows - and also further develops his raw style, cooking up a complex, moreish gumbo. Named Moonshine Magazine's solo blues artist of the year for 2015-16, Pistol Pete has been building an enviable name for himself on the live blues circuit for several years, both as a solo artist and as frontman of the electric outfit .44 Pistol. Now focusing wholly on his solo work, Wearn's blues has been labelled "music to drink, dance and stomp your feet to" by Derby Gig Guide, "devilishly catchy" by Staffs Live and simply "brilliant" on Yelp, the Stafford-based singer and songwriter gets every audience talking. Armed with an acoustic guitar, a stompbox and occasionally a harmonica, Pistol Pete rips through both witty originals and homages to his blues heritage: his version of 'Make Me Down A Pallet On The Floor', released recently on 7" vinyl by Birmingham's Soul Food Project, reimagines Mississippi John Hurt's standard as a cavernous, bitter singalong; when he cuts into 'Great Balls of Fire' live, meanwhile, few pint glasses are left upright. Service Station Coffee is Wearn's debut solo album and follows on the heels of 2015's Footstomping Acoustic Blues EP. It hones and enhances his sound yet further, featuring a selection of heart-felt original songs equal parts mordant and lively, wry and lusty. With appearances from folk star Dan Walsh, alt.country songbirds Franklin and Jones, plus fiddle, piano and more besides, the album rounds out Wearn's sound and sets him up for a fresh phase of his career. Over the last couple of years Pete has already played a five-day run at the Edinburgh Fringe, toured the length and breadth of both England and Scotland, received BBC Radio 6 Music airplay, and supported the likes of ragtime guitar legend Stefan Grossman, Muddy Water's eldest son Mud Morganfield, American folk superstars The Stray Birds, respected singer-songwriter Jonathan Byrd, and New Orleans songwriter Andrew Duhon. His is, in short, a blues holler you'll soon be hearing in every shire of the land.

Pete was fabulous the highlight of the event would recommend no question....

Thanks so much for having me - it was great to come and play for you. I hope you had an absolutely wonderful birthday!

Pete was unbelievable!!! What an amazing artist, so talented. The voice, appearance, communication with the audience, was wonderful. He made the whole party! The vibes were amazing. I highly recommend Pete!!! We will definitely invite him for other occasions.

Thanks so much for the lovely review! I had a fantastic afternoon & I'm really glad that you and the birthday boy enjoyed it :)

Amazing! Absolutely loved walking down the aisle to Petes amazing music. Thank you for being a part of our big day. Pete was punctual, had great communication and even learned some songs especially for us!

Thanks so much for inviting me to be part of your lovely day. I'm glad I was able to contribute what you wanted :) Congratulations again & the best of luck with everything going forwards!

With his...skill at blues, bluegrass and even spirituals, Wearn is a talent to watch