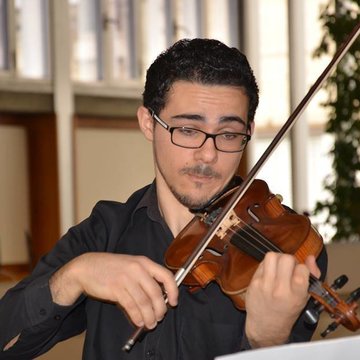 “And what mastery Pierre Attard displayed with his violin ... the soloist was in calm and total control of his part and a delight to watch”
Violinist
Cardiff

Pierre Louis – born in 1994 in Gozo, Malta - has completed a BMus(Hons) degree at Edinburgh Napier University (Scotland), graduating with first-class honours, whilst being awarded the Hebberts Prize for strings. He is currently undergoing a master of music degree in performance at the Royal Welsh College of Music, under the tuition of Lucy Gould. In 2010, he had made his debut abroad as solo violinist in Florence (Italy). In 2012, he featured as soloist with the Malta Philharmonic Orchestra in the Debutants Concert – where he was actually the youngest debutant soloist ever. Also very active as an orchestra player, he served as leader of the Malta Youth Orchestra, co-leader of the Universities of Scotland Symphony Orchestra and as sub-principal 2nd violin of the National Youth Orchestra of Scotland, besides being the leader of Edinburgh Napier Chamber Orchestra, where he also regularly featured as a soloist. Currently, he forms part of the Royal Welsh String Soloists and also served as co-leader of the Royal Welsh College Symphony Orchestra. Attard also plays the viola. “And what mastery Pierre Attard displayed with his violin for, whilst his colleagues were looking anxiously towards their music stands, the soloist was in calm and total control of his part and a delight to watch.” (EdinburghGuide)

And what mastery Pierre Attard displayed with his violin for, whilst his colleagues were looking anxiously towards their music, the soloist was in calm and total control of his part and a delight to watch.

That promise has developed as was evident in his performance of Primavera from Vivaldi’s Le Quattro Stagioni. His intonation is nigh impeccable, close to perfect, and his phrasing and interpretation gave the piece all the freshness of spring. He also dealt with apparent ease but far from nonchalant bravura even the most intricate passages... the young violinist found plenty of scope where he could express a very wide variety of emotions and technical skill.

More passion abounded in Attard’s own composition Shades of Emotions... There was a dominant motif which recurred throughout the piece and which came across in various shapes and moods. There was passion, anger, a questing and questioning and a sonorous range which went from the deepest to the highest form of protest and perhaps eventual resignation.