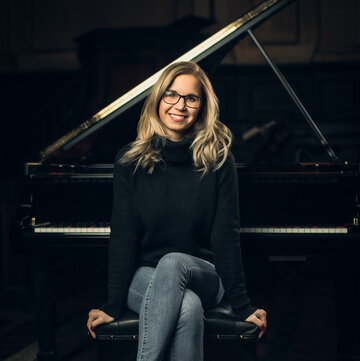 A classically trained musician with a degree in harpsichord, piano and church organ who enjoys playing repertoire from baroque to pop.
3 of 15 photos
Organist
London
Public liability insurance of £10 million

Petra completed her studies at Trinity College of Music, London and was awarded a TCM Scholarship, the Raymond Russel Prize as well as the June Emerson Wind Music Launchpad Prize. Petra is known for her radio and television work, including a live broadcast on BBC Radio 3, recording the soundtrack for BBC's Wolf Hall (Debbie Wiseman) and ITV period drama series Victoria (Ruth Barrett). She recently featured on award winning CD by the Moravian composer Gottfried Finger with The Harmonious Society of Tickle-Fiddle Gentlemen. Petra has been in demand as a soloist (piano, harpsichord, organ), accompanist, orchestral and chamber musician and has performed in France, Austria, Turkey, Italy, Palma de Mallorca, Spain and in England for the UK's leading ensembles such as the Royal Philharmonic Orchestra in the Royal Albert Hall, London Mozart Players, National Symphony Orchestra, European Chamber Orchestra, Locrian Ensemble, Trafalgar Sinfonia, London Concertante, Belsize Baroque, Ensemble OrQuesta and others. In addition to performing, Petra enjoys teaching piano and harpsichord and has participated in several educational projects with the English Concert, Amade Players and London Piano Masters. Recent project includes the release of an experimental EP (Experimentum), appearing on all main musical streaming platforms, a fusion of baroque music and electronic sound effects in cooperation with DIY Music Productions.

I always try to accommodate my clients and very rarely would plan another event on the day, just to avoid rushing and bring some calmness and joy to the event.

Mostly I play classical music and acoustic instruments so I am afraid I won't have an equipment for this.

if I bring my own electric piano it'll usually take only few minutes, if I am bringing harpsichord - I will need about half an hour to move the instrument and tune it. If it's a church organ I am not familiar with it will only take few minutes to try all stops and see if all keys are working and what sort of condition is the instrument in.

I don't usually have a set list but surely can help with an advice and musical choices for event, which goes hand by hand with your own taste and wish.

Yes that's the part of my job. Happy to bring my own instrument.

Yes of course I am happy to accommodate to listeners, although I would need some notice to learn the piece, depending on the difficulty of the music.

Standard Prices
All prices include:Bringing instrument, consultation and expertise at any time.
Petra

SB
Sarah B
1 month ago

We would thoroughly recommend Petra in the future. She responded to our messages promptly, was able to suggest many different pieces of music that were fitting for our event and played beautifully at my Grandad’s funeral. She was brilliant! Thank you so much.

Booked last minute to play at church for my wedding. Petra was truly wonderful from start to finish. Quick to reply, gave great suggestions, did as much as she to make my life as easy as possible, went the extra mile and was a joy to deal with. Played the requested music beautifully and had our guests humming and tapping their feet. Would not hesitate to book Petra again, a true professional and a wonderful musician. Thanks again Petra!!

Petra is an accomplished musician. The music she played during our wedding was perfect and highly praised. She was incredibly responsive and proactive throughout the booking process, offering recommendations where we were unsure and was happy to take on feedback. We highly recommend booking her.

PS
Penny S
2 years ago, for a Funeral / Memorial service in Herne Hill

Hi Petra We have heard from the family today. They were really pleased and asked us to pass on their thanks - so well done! Penny London Funeral Singers

MC
Margaret C
2 years ago, for a Wedding in Crooms Hill

Hi Petra Just wanted to say a huge thank you to you and Emily. You are both amazing. Everyone commented on the beautiful playing and singing. We were just so lucky you were able to perform at the wedding. Lee and Hanna were so happy with everything.