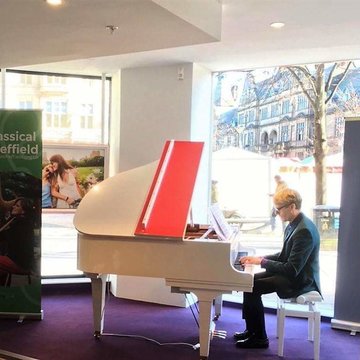 Peter is a classically trained pianist who resides in Sheffield. He plays a wide variety of music including classical, popular and jazz.
3 of 6 photos
Pianist
Sheffield

Peter studied piano privately with a teacher in Sydney, Australia. He started piano lessons at the age of seven and has been playing the piano for 40 years now. He reached 8th grade standard of the ABRSM exams. Since moving to Sheffield in 2000 to live with his husband, Peter has played the piano at many different venues and for many different occasions. He plays regular gigs at pubs, restaurants and hotels both in Sheffield and in Southport, Merseyside. He has also organised and played at his own two Charity Concerts held at the Sheffield Town Hall and accompanied singers. Peter was very proud to play the piano at the 1st Equal Marriage Fair held at the Sheffield Town Hall in 2014. Peter is both an accomplished cocktail bar pianist and a classical pianist. His wide repertoire includes Chopin, Bach, Beethoven, Mozart, Shostakovich and Satie as well as a large selection of popular songs, jazz standards and songs from the musicals. He has a wide experience of playing for various functions including weddings, christenings and other special occasions. Peter also sings with Purple Cats Community Choir in Sheffield

Pianists in the UK
Pianists in South Yorkshire
Pianists in Rotherham
Pianists in Barnsley
Pianists in Doncaster
Pianists in Wakefield
Customer Service
Discover
Company
As seen on
© Encore Technologies, Ltd.
Crafted with bagels and in London