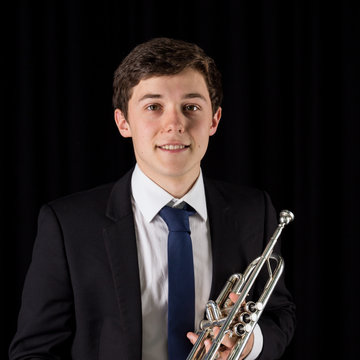 Check availability and get a free quote now - no commitment to book
From£200
Watch & Listen
About Peter
Reviews
Home page
Peter Athans
Like Peter?
Watch & Listen
1 of 1 video
1080p

I am a free-lance trumpet player with a Master of Performance Degree from Royal College of Music. I play natural trumpet, cornet and piano.
Trumpeter
Liverpool
Public liability insurance of £10 million

Peter Athans was born in Liverpool and began playing the trumpet aged 5. He joined the Liverpool Music Support Service when he was 8 before joining the Formby Brass Band aged 9. He toured several countries including Spain, Czech Republic and China and frequently played solos in many venues. He was a member of the National Children's Brass Band of Great Britain for 3 years. He was also a member of several orchestras including the Principal Trumpet of the Liverpool Philharmonic Youth Orchestra during which time, he studied for 3 years with Rhys Owens, Principal Trumpet of the RLPO. In September 2012, Peter was awarded a Trinity College London Scholarship and a place to study Trumpet at Trinity Laban Conservatoire of Music and Dance. Since joining Trinity, he has studied with Brian Thomson, Bob Farley, Tony Cross and Andy Hendrie. He is also a member of the prestigious YMSO and Principal Cornet of The Royal Greenwich Brass Band and regularly freelances across the country. During his time at Trinity Laban, he has played in many concerts and prestigious places, such as, The Bridgewater Hall, St John's Smith Square, BBC Broadcasting House (BBC Radio 3 Live), a Royal Flotilla on the Thames and most notably playing 1st Trumpet in Trinity Laban's performance of Mahler's 5th Symphony at Cadogan Hall under the baton of Paul Daniel. Peter has also performed in masterclasses with some outstanding trumpet players including Gabor Tarkovi (Berlin Philharmonic), Philip Cobb (LSO) and Tom Hooten (LA Philharmonic). He is also a member of many chamber groups including the award winning GMT Brass Ensemble. Over the past few years, Peter has benefitted from generous grants provided by The Wolfson Foundation Trust Fund and EMI Trust Fund which has helped towards the purchase of new instruments. He has also recently become an extra with the BBC Philharmonic Orchestra with his most recent performances being Mahler’s 2nd Symphony at the Bridgewater Hall and the BBC 10 pieces concert at the Proms 2016. Peter is delighted and honoured to have just graduated from The Royal College of Music with a Master of Performance distinction supported by the Ian Evans Lombe Scholarship Fund.

Absolutely brilliant sound and tone from this trumpeter

what a beautiful sound and technique. Always professional and adjustable