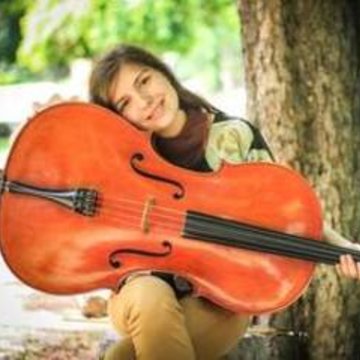 As a five-year-old she began learning piano and, since the age of six, she has played the cello in the class of Daniela Cherpokova-Nikolaeva at the Lybomir Pipkov National School of Music in Sofia (Bulgaria). Since September 2013, she is a student of prof. Stefan Popov in Guildhall School of Music and Drama (London). Penka has been a scholarship student of both the Raina Kabaivanska Foundation for gifted children and the Communitas Foundation for exceptional achievements and skills. She is a First Prize winner at the international competitions “Young Virtuosos” (2005- 2010) in Sofia and “M.A.G.I.C.” (2007 and 2011) in Bourgas. In January 2012 together with her piano trio “Appassionato” won at the European Radio Competition “Concertino Praga – 2012”: the First Prize in a category “Trio” (chamber music), the special prize of the Czech Radio – “Helena Karaskova” and the prize of EMCY. In June the overall winners took part in the concert of Laureates in the “Dvorak” Hall (Rudolfinum) and at the concerts of Prize winners of South Bohemian Festival “Concertino Praga”. In July the trio recorded their programme in the Czech Radio which published their profile CD in November (2012). The trio performed solo recitals in Luxembourg and Germany at the invitation of EMCY (The European Union of Music Competitions for Youth) in March 2013. In April 2012 Penka won the Second Prize at the international competition for cellists “Karl Davidov” in Kuldiga, Latvia. In November 2013 she received the Third prize at the III M. Elsky International Contest of String Bow instruments performers in Minsk (Belarus). She refines her skills in the master classes of Prof. Vladimir Perlin, Mats Lidstrom, Dominique de Williencourt, Gavriel Lipkind , Seeli Toivio, Martin Zeller, “Talich” String Quartet, Prof. Grigory Feyghin, Elena Ashkenazy, Prof. Kevork Mardirossian, Alexander Zemcov, etc.