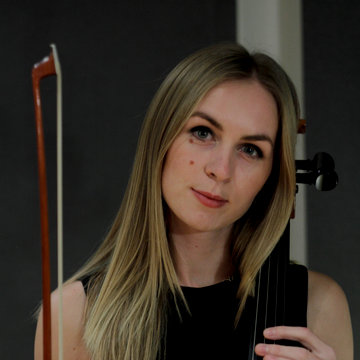 Paulina studied the cello at Piotr Swierc music school in Poland, Hochschule für Musik in Köln, Germany, the Purcell School of Music in London with a full scholarship and The Guildhall School of Music and Drama. Throughout her studies Paulina had won a number of competitions in Poland and UK, including two Wigmore Hall chamber music competitions. During her studies Paulina took part in a Maggini Quartet Chamber Music Course, Cadenza Music Course and Tata International Music Course in Hungary. In November 2005 she was awarded the title of The Young Musician of The Year in Hertfordshire in England. Her teachers included Alexander Boyarski, Pierre Doumenge, Michal Kaznowski, Pal Banda and masterclasses with Antonio Meneses. Paulina enjoys a busy freelance career as a solo, chamber and orchestral musician. Her solo performances include recitals at The Royal Festival Hall in London, Köln Castle in Germany, Tata Castle in Hungary and many other prestigious venues across the UK. An active chamber musician, Paulina has performed at the Wigmore Hall, the Royal Festival Hall and Milton Court in London, The Munich Rathaus, Tata Castle in Hungary, the British Film Institute, Tate Modern, British Museum and elsewhere throughout Europe. In the field of orchestra, Paulina has worked with a number of great conductors including Valery Gergiev and the London Symphony Orchestra, Sir Simon Rattle, Gianandrea Noseda and John Rutter. Most recently she performed as co - principal at The New Generation Festival Orchestra in Italy, co - principal of Berliner Symphoniker, principal of the London Arte Chamber Orchestra, co - principal with London Metropolitan Orchestra, the Light of Music Symphony Orchestra, Orpheus Sinfonia and Melos Sinfonia throughout the UK, Europe and Asia. As a session cellist Paulina is in high demand for recordings, film and TV work - most recently for Hans Zimmer, BBC, Disney, Promax, the British Film Institute, Burberry. She has also made a number of studio recordings for Pulse Films, Microsoft, Spitfire Audio sampling library, Sainsbury’s, Carling and Sorapol Fashion label. Finishing off last year’s season Paulina’s cello solo debuted in London’s West End at Vaudeville Theatre with a new opera production “The Selfish Giant” written by Guy Chambers for Classical Spring Theatre. Her solo recordings have also debuted in cinemas across Germany with the film “Phantomschmerz”, recorded in Munich. Paulina is also a keen composer. Her debut performance took place in London, 2017 where three of her compositions were performed by a chamber orchestra with Paulina’s solo, formed especially for the Scordatura Concert Series. In 2015 she won a songwriting competition at SoundShoots and collaborated with producer Refracture, followed by a release of the winning composition through his label, Perfecto Records. She has written alongside producer Guy Chambers with whom she performed her compositions solo with orchestra on a number of occasions at his monthly music shows in London. Highlights of the 2019 season will include recitals in London, Oxford and Scotland, a solo appearance with The Royal Ballet in London, a release of a newly recorded film score CD in Germany as well as orchestra tours around Europe. When not playing, Paulina teaches at the Junior Royal Conservatoire of Scotland, The Purcell School of Music and works as Orchestra Coordinator for Scottish Opera.

Requirebros by Gaspar Cassado
Kontredans by L.V Beethoven
An Old Italian Love song by Giuseppe Sammartini
The Swan by Saint-Saens
The Elephant by Saint-Saens
Spanish Dance, No.2, Op37 by Enrique Granados
Tarantella by D.W Squire
Prelude from Suite no.1 by J.S. Bach
Suite no.3 by J.S Bach
Por Una Cabeza by Carlos Gardel
Sonata in e-minor by A.Vivaldi
Minuet in G by L.V Beethoven
Nocturne by P.I Tchaikovsky
Valse Sentimentale by P.I Tchaikovsky
Chanson Triste Op.40, No.2 by P.I Tchaikovsky
Caton Song from Opera “Casanova” by L.Rozycki
Sonata in G by B.Marcello
Etude no.13 and 27 by Sebastian Lee
Song Op.67 by D.Kabalewski
March by D.Kabalewski
Dance by D.Kabalewski
Lullaby by J.Brahms
Nina by G.B Pergolesi
Andante from Orfeo by C.W von Gluck
Lento from Five Pieces in Popular Mood by R.Schumann
Andante by L. van Beethoven
Menuet from Divertimento in D by W.A Mozart
1st movement from E-minor Cello Sonata by Brahms

I love the cello and couldn’t think of an instrument I’d want more at my wedding. Paulina was fantastic. Beautiful playing and accommodating by moving with the people so music could be heard at our venue. Highly recommend! 🖤

Very happy with Paulina, which performed at our wedding ceremony and cocktail hour. Beautiful playing and good selection of classical pieces. We had a destination wedding and couldn't meet her beforehand. It was absolutely beautiful, couldn't be happier!

"Paulina has been an outstanding colleague who has performed at the highest level. She is highly creative, flexible and very reliable. She has a very pleasant and amiable character which works very well with many different people in different situations. An asset to any work environment." - Aidan Goetzee Head of Music Technology ICT co-ordinator Audio Engineer Course Design and Delivery