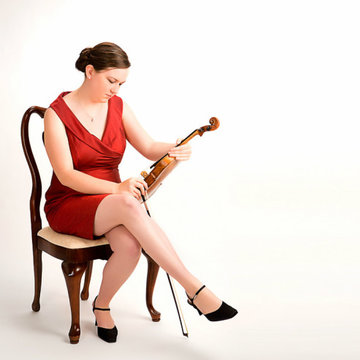 Check availability and get a free quote now - no commitment to book
From£180
About Paula
Reviews
Home page
Paula Muldoon
Like Paula?

Paula is an Irish-American violinist working in London with the Philharmonia, Mozart Players, and the OAE. Blogs as The Mindful Violinist.
3 of 4 photos
Violinist
London
Public liability insurance of £10 million

Irish-American violinist Paula Muldoon is currently based in London where she combines performing, touring and recording with the London Symphony Orchestra, the Philharmonia Orchestra, the London Mozart Players, the Orchestre Revolutionnaire et Romantique, the Orchestra of the Age of the Enlightenment, and Arcangelo with working as Business Developer for Encore. In May 2016, Paula launched her blog The Mindful Violinist. After studying at the Guildhall School in London, Paula spent a year in Liverpool as member of the Royal Liverpool Philharmonic Orchestra. While with the Liverpool Phil, Paula took part in several award-winning recordings and ate a lot of delicious cake, courtesy of the first violin baking section. She also did her best to import USA-style chocolate chip cookies into the culinary repertoire of the orchestra. Paula was also the Operations Manager for Arcangelo from 2014 - 2016. Paula is an alumna of the University of Michigan (Ann Arbor, USA). In addition to studying violin, Paula indulged her creative writing and language skills by writing The White Birds, a novel set in Tudor England (for which she was the only undergraduate finalist in the prestigious Hopwood writing competition) and by translating the Latin poem Stabat Mater (winning the undergraduate classics translation award). She was one of only six people to receive the University of Michigan nomination to the Marshall Scholarship. She also played a lot of Frisbee, Sardines, and Nertz (a fast-paced card game). Paula grew up in beautiful Falmouth, Cape Cod and studied violin and voice in Boston at the New England Conservatory Preparatory School. As a member of NEC’s youth orchestras, Paula toured France, Spain, Venezuela and Brazil, the latter two with the world-renowned Youth Philharmonic Orchestra under the direction of Benjamin Zander. While still in high school, she co-founded and conducted Schola Cantorum of Falmouth, a 16-voice Renaissance a cappella choir. Paula began playing chamber music at the age of eleven at Falmouth’s Soundfest Chamber Music Festival. After many years as a student with the Festival, she joined the faculty in 2009 and the next year was appointed Managing Director. Paula’s deep love for chamber music led her to the first violin chair in the Rosseels Quartet, and more recently she performed chamber music to high acclaim at the Astona International Music Festival in Switzerland. Dedicated to the performance of early music, Paula was a member of a harpsichord/violin/cello trio based at the University of Michigan (UM), Trio d’Avignon. Paula also soloed in a performance of the complete Brandenburg Concertos at the UM Museum of Art and more recently soloed in Piazzolla’s Four Seasons at the Vault Festival beneath Waterloo Station in London. While still an undergraduate, Paula worked with the University Musical Society (UMS) in Ann Arbor, where she coordinated a creative residency by the Royal Shakespeare Company (Stratford-upon-Avon, England), working closely with esteemed Professor of English Ralph Williams and UMS President Kenneth Fischer. As a 4th year undergraduate, Paula also taught a 1st-year seminar on Mozart’s Great Mass in c minor. Paula has received scholarships from the University of Michigan as well as Musicorda (MA), Chautauqua (NY), Soundfest (MA), and Astona International (Switzerland) music festivals, and in summer 2011 she was a Violin Fellow at the Spoleto Festival USA Orchestra. In her spare time, she enjoys reading good novels, poetry and non-fiction, cooking, running, watching Doctor Who and Star Trek, crosswords, word games, lame jokes, and drinking good coffee.

In lessons, Paula is able to recognize what is holding her students back and knows how to effectively fix the problem. Paula keeps lessons focused and productive. My son also credits Paula with inspiring him to practice, something that no other teacher has been able to do.