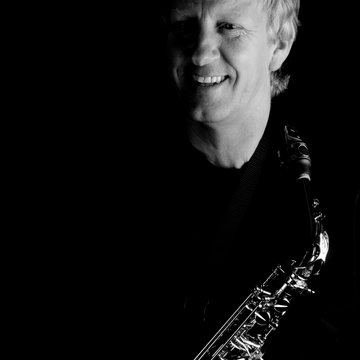 Two films, one starring Michael Douglas and Melanie Griffiths and the other with Robson and Jerome, feature in the career of Paul Hollis as a professional saxophonist. Other credits include appearances on, The Generation Game, Talking Telephone Numbers, Pebble Mill and This Morning. Paul has also recorded sound tracks for TV shows and adverts. In the earlier part of his career, Paul was musical director for several years onboard various luxury cruise liners. He has also toured extensively with different artistes including; Bucks Fizz, The Nolans, Dave Willets, Gerade Kenny and Andy Prior. As well as playing solo saxophone at various events Paul also has his unique ‘Take Five’ Saxophone Trio with a varied and fully accompanied repertoire creating a great atmosphere ideal for weddings and other special occasions. Paul’s most recent TV appearance was in December playing sax on Channel 4s Deal or No Deal. Currently playing Lead Tenor with the 'Nottingham Jazz Orchestra' Paul also has 4 books published internationally with another 3 in the pipeline.

Standard Prices
All prices include:PA. Public Liability Insurance, FaceTime or Skype consultation if required. Back ground music during my breaks.

Thank you so much for playing at our wedding Paul. Not only us, but so many of our guests thoroughly enjoyed you wonderful music! We hope you enjoyed the evening. Kindest regards, Bruno and Sonia

We had the best day ever! Thank you for being such a part of our day, you were incredible! I’ve had many people asking me for your number so our guests must been very pleased too! Thanks again, best wishes Nicole x

Hi Paul, I am so sorry that I didn’t get to speak to you more on our wedding day on Thursday 30 th, if I am honest I felt all day like I spoke to everyone and no one! It went in such a blur.. although I will always remember Tom stepping out of our wedding car and hearing you play, he was so chuffed. I just wanted to say thank you, everyone said how lovely it was to have you play and how much they enjoyed it. My dad also loved that he got to chat to you and make some requests, people were saying how fantastic you were all through the day, you really made it a lovely afternoon. If there is anywhere that you would like me to post a review to help you in the future please just let me know. Thanks again, Kind Regards Katie Hewitt (Wilson)

Hi Paul - Just a quick note to say a huge thanks for such a great set at our wedding! All our guests loved your music and your positive approach on the run up to the big day was much appreciated. You were very accommodating and proactive with the playlist- especially going the extra mile to learn our first dance song. Thanks again and we are looking forward to seeing you play at our anniversary! P&V

Great professional performance by Paul. He couldn't have been more accommodating.