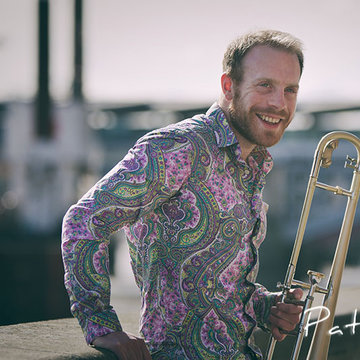 Born into a musical family, Patrick played piano and recorder from an early age, took up trombone aged 11, and was also a chorister at Old St Paul’s in Edinburgh, Scotland’s oldest “sang school”. He studied at St Mary’s Music School, and in his final year also obtained the Advanced Jazz Diploma of St Andrew’s University, before going on to study at the Guildhall School of Music and Drama, London, where his studies were generously supported by the Donald Dewar Trust, the Cross Trust, and was also awarded and Erasmus Foundation Scholarship which enabled him to undertake a period of study at the Paris Conservatoire. From 2013-16 Patrick pursued an advanced study project, generously sponsored by the Musicians Benevolent Fund, which enabled him to meet and study with leading trombonists across Europe and the USA in the fields of jazz, classical and early music. Patrick’s musical interests have always been very broad, ranging from jazz to classical, early music to the avant-garde and popular. Patrick is currently based in London, working as a freelance trombonist, brass teacher, composer and arranger working across a wide variety of genres and has performed and recorded with many leading artists, including Boy George, The Heritage Orchestra (Goldie, Sparks and Pete Tong), European Jazz Orchestra, Book of Mormon (West End) Peter Andre (Big Night tour 2014, Come Swing with me 2016), London Jazz Orchestra, Scrouge (UK tour), Venetian Casino Macau (In house band 2013), Michelle Burke and James Ross (Celtic Connections 2015), Grand Union Orchestra, Brighton Early Music Festival, The Big Smoke Family, Gizelle Smith, Jesus Cutinio, Chaconne Oscavaldez, Femi Lance Omole, Cuban combination, Future Dub Project, The Boom Yea, Gypsy Hill, Brassroots, Riot Jazz, The Coalminers, Ma’Grass, Mimika Ensemble and many more, Pandora’s Box, Setbual Festival (Portugal) and Galway Early Music Festival. Patrick writes and leads the group ‘London Groove Collective’ and also co-writes with ‘don’t Problem’. Patrick also plays the Carnyx, A 2,000 year old Celtic war horn (of which only two reconstructed examples exist) performing at events including the opening ceremony of the Derry Year of Culture in Ireland, the televised celebrations for the re-opening the National Museum of Scotland in Edinburgh, and final concert of the Belladum Festival 2014. In 2014 he was invited to become a member of the European Music Archaeology Project (EMAP). His classical ensemble experience has included Music Theatre Wales, The London Sinfonietta Academy, Dartington Festival Orchestra, Aurora Festival Orchestra Sweden and the Chipping Campden Orchestra. He was also a semi Finalist in the BBC Young Brass Musician of the Year 2010, and has performed at the Mumbai International Festival, International Jazz Conference in Toronto, and as a Young Artist at the International Trombone Festival, Beijing. Trombone Teacher Patrick Teaches at Goldsmiths University, International School of London and Privately. Patrick holds a BMus Degree in classical performance from the Guildhall School of Music and Drama and the Advanced Jazz Diploma of St Andrew's University and teaches Trumpet, Horn, Euphonium, Tuba, Cornet and all recorders as well as Trombone. As a professional performer and improviser on trombone, sackbut and recorder he brings a wealth of practical experience and enthusiasm to his teaching at every level, from beginner to advanced individual instrumental tuition. As well as current music tuition Patrick has been employed as a member of staff for Eaton Square School, Camden Music Service, Lambeth Music service (Brass) and Avanti House. As an ensemble coach he has taught for the Maltese Big Band, and given workshops with the Brighton Early Music Festival and The Grand Union Orchestra

Verified
Marcelo A, 3 years ago

I saw Samba Stones play first time back in April at Wylam Brewery in Newcastle. I was so impressed with their energetic and high skilled performance of my favorite Rolling Stones songs in a super attractive Samba style that I took my whole family to catch their performance at the Rhythm Tree Festival in July, and they were absolutely incredible."

I was impressed with their energy and talent on stage. They were one of the best bands of the festival in Isle of Wight. I enjoyed it a lot!

Just brilliant! The band is full of energy and personality. Loved it!

Verified
Milly B, 3 years ago

Amazing show, so much energy and talent on the stage!" Milly

Verified
Odara B, 3 years ago

It was magical, fiery, amazing energy. What a combination Rolling Stones with Brazilian rhythms! Best show for a long long time! I was electrified at the end of it! We want more!" Priscilla Diniz

I went to their show in Newscastle and loved it. I couldnt stop dancing. Brazilian music is great.. and combined with Rolling Stones, it`s a must!

I had a lot of fun at their concert in Newscastle. They have a very unique style and a lot of energy on stage. Looking forward to their next gig.

Trombonists in the UK