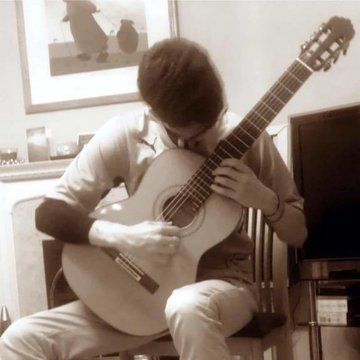 Check availability and get a free quote now - no commitment to book
From£180
Watch & Listen
About Owen
Home page
Owen Bunting
Like Owen?
Watch & Listen
1 of 1 video
Dowland: Fantasia no.7 - Owen Bunting (guitar)

Owen is a classical guitarist based in Manchester, UK. He is currently in his 3rd year of study at the Royal Northern College of Music.
Guitarist
Manchester

Owen Bunting was born in 1995 and grew up in Letchworth Garden City, Hertfordshire. He studied guitar at school from the age of eight and showed a keen interest in classical music performance. At thirteen years old, Owen won a scholarship under the Music and Dance Scheme to study at The Purcell School for Young Musicians’. Whilst there he studied with Milica Ilic and then later ßwith Francesco Mariani. In 2011, Owen performed at Buckingham Palace in the presence of Prince Charles and later that year gave the UK premiere of Gabriel Jackson’s piece for electric guitar and choir at Chapel Royal, Hampton Court Palace. The following year, Owen performed at the Royal Festival Hall and in 2013 won a chamber music competition to play Takemitsu’s ‘Toward the Sea’ at the Wigmore Hall. In 2013, Owen was awarded a Presidential Scholarship for Exceptionally Talented Applicants to study at the San Francisco Conservatory of Music with David Tanenbaum. He also had tutoring on chamber music with guitarist Sergio Assad of the world renowned Assad Duo. Whilst in San Francisco, Owen played at various venues, namely the San Francisco Centre for New Music. Owen is currently in his third year of undergraduate studies under the tutorship of Craig Ogden at the Royal Northern College of Music. He also receives further tutoring from modern music specialist Tom McKinney and Rory Russell of the Aquarelle Guitar Quartet. Whilst at the RNCM, he has become part of a guitar trio that mainly plays arrangements of string quartets and other non-guitar music. Owen’s main interest is contemporary music and furthering the repertoire of the classical guitar. He has been involved in various different premieres of new music, namely a solo guitar piece of which he is the dedicatee and two guitar quartets, both by student composers at the RNCM.