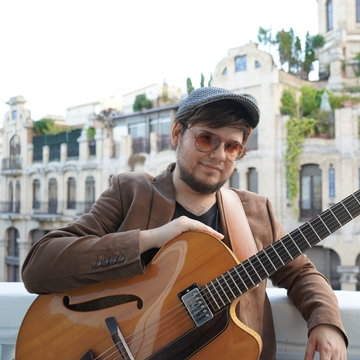 The Italian-Paraguayan guitarist Orlando Bonzi with his special voice and unique way of playing has now become the new virtuoso guitarist with a deep musicality in Europe. As a complete musician in both performance and music production, he has participated in live concerts and studio recording in various projects of Jazz, rock, funk, Latin, Brazilian music, Fusion, pop , Blues, South American folklore and R&B. His international trajectory has influenced his music and has led him to perform in many cities/countries: Paraguay, Brazil, New York, Argentina, Hong Kong, Singapore, Taiwan, China, Japan, Korea, Vietnam, Thailand, Norway, Poland and Spain. In 2014 Orlando has recorded a collection of his new Jazz compositions in Spain and presented renowned musicians such as Gary Willis (Tribal Tech), Gergo Borlai, Jeff Ballard, Perico Sambeat, Toni Belenguer, Alberto Palau, Stephane Adsuar and Damien Varaillon. He named the project “Jazz del Sur” meaning Jazz from South, which is a mixture of Modern Jazz and Folk music from South America and Southern Europe. The album is now available on Spotify and iTunes, named ‘Orlando Bonzi’. In 2018 Orlando was awarded 2nd runner-up of Lee Ritenour Competition in rhythm/accompaniment, and is now based in London with his violinist wife Yanice Tsang Bonzi, directing Symbiosis Strings Production.

Orlando and Yanice are brilliant musicians, they have played in 3 of our conferences and they carry such excellence. I would recommend both of them to any one who desires to have them play at their events.

Overall, Yanice and her musicians exceeded my expectation. The music during the ceremony was sweet and warm. The music during the dinner was more than just background music as many guests came up to us to tell how good the band was. You guys are true musicians with heart and I can tell that it's not just business as usual. We would definitely recommend you guys without any hesitations for future events.