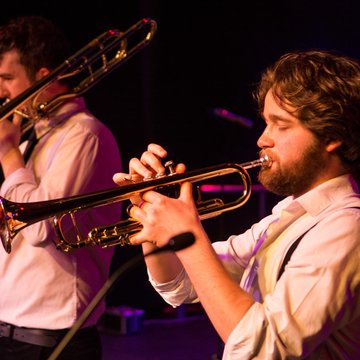 Oliver Chubb has recently completed his undergraduate degree in Music at the University of Bristol, specialising in Composition and Performance.  While based in Bristol, he studied trumpet with Ross Brown and singing with Ian Yemm and Angela Hickey. Oliver began his musical life as a chorister at Portsmouth Cathedral, which founded a lifelong love of choral music. He started the trumpet at the age of six with the intention of “making people’s ears explode” – listeners will be pleased to know he has long since abandoned this desire. As a young trumpeter he performed with several national and county-level ensembles and has had masterclasses with many world-class performers, including Crispian Steele-Perkins and Mark Milhoffer. During his time at the University of Bristol, he has performed in many ensembles as both a trumpeter and singer; he has been the principal trumpet of the University Chamber Orchestra for two years and as a singer has sung in many choirs and as a soloist, most notably while on tour with the University in Prague last year (Schubert's Mass in F) and Barcelona last year (Mozart's Requiem). In his final year at Bristol, he was awarded both the JH Britton Award and the Performance Prize by the Music Department. Further to his studies at the University, Oliver was a choral scholar at Bristol Cathedral (2015-2017), with whom he has performed live on BBC Radio 3 and on BBC One for the 2016 Christmas Morning Service as well as taking part in the recording of the Choir’s new CD.  He has also had the opportunity to sing under the baton of Sir Simon Rattle (The Dream of Gerontius, 2015) and Marin Alsop (Verdi’s Requiem, 2016) at the BBC Proms. He is active as a performer in the Bristol music scene and has played and sung for many local orchestras and choirs. Other pursuits have included conducting a small choir specialising in 20th century repertoire, and founding a Bristol-based function band.   Tours in the last couple of years have been to Switzerland, the Czech Republic, Bordeaux, Barcelona, Cornwall and Brittany.  Since leaving the university, he has given two public recitals in his native Hampshire accompanied by his former choirmaster, Dr. David Price.

Wedding fanfares (too many to list!)
Most popular are:
Mendelssohn: Wedding March
Purcell: Trumpet Tune
Clarke: Trumpet Voluntary
Handel: Suite in D
Handel: Eternal Source of Light Divine (as played at the wedding of Prince Harry and Meghan Markle)
Charpentier: Prelude to Te
I am happy to learn pieces on demand!

Olly was absolutely fantastic on the day. Bad weather, bad communication with event organisers really set Olly a challenge. He was adaptable and accommodating. A true talent in every way and played the song requested with a passion and skill that made the moment the most memorable for me. Thank you Olly.

Olly was easy to work with, played with musicality and was very professional!