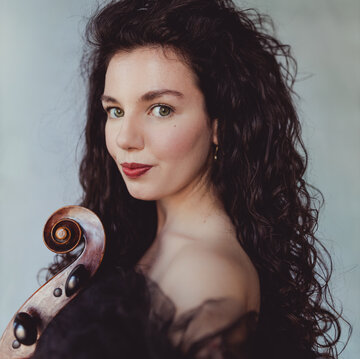 Cellist based in London
3 of 8 photos
Cellist
London

Olivia’s first inspiration to play the cello came about when she was 3 years old; she had been watching my mother play and had told her that she wanted to play ‘one of those’. She joined the RCMJD at the age of 8, and here she spent 3 years developing her chamber music skills, orchestral skills and also regularly participated in performance platforms which gave her access to short solo recitals. During this period she studied with Sasha Boyarsky, and by the age of 11 had gained a distinction in grade 8 cello (ABRSM). Olivia has always been a dedicated orchestral musician; since the age of 9 she led the string orchestra of the RCMJD, and following this joined Suffolk Youth Orchestra, where she toured as principal cellist for 3 years. In July 2014, Olivia participated in the LSO String Academy, led by string principals of the LSO, where she learnt vital orchestral skills and explored a professional calibre of performance, culminating in a concert at LSO St Luke’s. Furthermore Olivia took part in the International Youth Symphony, where she was selected as one of four international cellists aged 16-25 to tour with them in San Diego for three weeks in July 2014. In addition, Olivia was a member of Britten Sinfonia Academy where she explored working as a chamber orchestral musician. In 2014 Olivia joined Aldeburgh Young Musicians where she was able to open her mind to many different genres and styles of music and performance, which has allowed her to develop myself as a musician, gaining versatility in her work. She has worked alongside many top level musicians of different genres including Pete Churchill, Charlotte Bray, and has performed at the London Jazz Festival with Led Bib. As a result of this Olivia has developed an interest in contemporary classical, folk, pop, improvisatory electronic music and jazz. Olivia has experience in the musical theatre industry, with previous performances at the Epsom Playhouse, Bishopsgate Institute and Theatre Royal Stratford East. Olivia regularly freelances in commercial work and has built up lots of experience in this field. Olivia made her concerto debut with the City of Cambridge Symphony Orchestra in November 2013, performing Bloch’s Schelomo, and was booked to perform the Elgar Cello Concerto in March 2015, as well as the Wolsey Orchestra in May 2015. Olivia studied with Felix Schmidt at the Royal Academy of Music, where she was awarded a scholarship at audition despite undertaking her undergraduate studies a year early. She has also had masterclasses with Alexander Baillie, Tim Hugh, Daniel Gardener and Anita Lasker Wallfisch. Olivia plays on a 19th Century Betts Cello kindly on loan from the Royal Academy of Music. Olivia graduated from the Royal Academy of Music with first class honours in 2019.

Yes! I can provide string quartet, trio and duo as well as cello duo.

I always try my best to be as flexible as possible to ensure your event runs as smoothly as it can. If timings change slightly in the run up to the event then just let me know!

As an acoustic cellist, I need around 15-30 minutes to set up.

Yes, I bring my cello and myself and that’s pretty much it - all I need is a chair (!)

Absolutely. I’m happy to arrange something (prior to discussion and with notice at least a week before the event) to make your event as special as possible.

They enjoy the music I provide and the versatility, as well as service with a smile.

So many to say just a couple! I am influenced by artists of all genres of music every day.

At the Royal Albert Hall in London.

Verified
Steph B, 1 month ago

Olivia was wonderful. From helping me choose the best pieces of music to adding her own musical personal touch during the reading of the owl and the pussy cat . She played beautifully. I Would highly recommend Olivia .

Olivia played beautifully for my mother’s 50th birthday party. We particularly loved ‘Blue Moon’, and other old jazz standards as well as the more upbeat and modern tunes. She was professional, punctual, and very friendly as well as superbly dressed. Olivia was great at answering any question we needed, and was happy to arrange ‘Autumn Leaves’ as it is my mother’s favourite. 5 stars!

Olivia played at my shop opening in November, and I wanted to provide an air of glitz and glamour. She certainly delivered! Olivia was beautifully dressed, played wonderfully and with a good variety of songs. Overall, I would highly recommend Olivia!