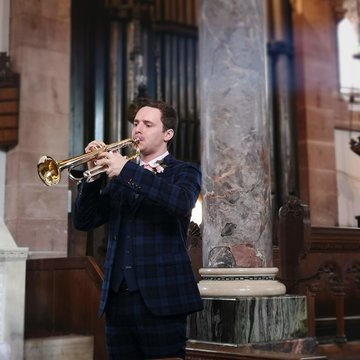 Currently based in London and Herefordshire, I am available for many types of event, as a Soloist or as part of an ensemble.

Having a passion for performing music from an early age, Oliver began playing the Cornet at the age of Eight, receiving regular one-to-one instrumental lessons in order to obtain ABRSM Grade 8 Practical and ABRSM Grade 5 Theory qualifications. He played in several local Brass Bands, and through these ensembles he was fortunate to play in several prestigious venues, including the Birmingham Symphony Hall and the Royal Albert Hall. They also provided the opportunity for Oliver to work under a number of professional musicians from many aspects of the music industry, as well as attending workshops with top musicians in the field. He studied Music as well as Music Production during Sixth Form. During this time Oliver gained fundamental knowledge in the use of Music Technology in performance and in a studio environment. He also performed as a member of the Pit Band for several sell-out performances of Bernstein's West Side Story. He was a member of a number of ensembles including the Orchestra, Jazz Band and the Choir. Following Sixth Form, Oliver moved to London to study BA Music at Middlesex University. Shortly after starting here, he took up the Trumpet, and soon joined many groups. Oliver graduated from Middlesex University with a 1st Class BA Hons degree, and continues to play with many groups across London, regularly performing all around the UK and Europe.

If timings of your event change after booking, please get in touch as soon as possible. I will always endeavour to be able to perform at your event where possible.

Unfortunately this is something that I do not currently offer.

I am able to set up in around 15 minutes prior to the event.

Any pieces from my set list can be picked, and if you have any other requests please get in touch.

I will supply everything I require to perform.

If there are any specific requests, please get in touch prior to the event and where possible I will learn the piece for you.

Standard Prices
All prices include:Telephone consultation before the event to discuss requirement.
NEW!Virtual services
Personalised Music Message
Book me to create a unique music video for you to send to a friend as a gift. This could be a birthday message, first dance song for a wedding anniversary, or just your friend's favourite song to cheer them up.
£15

Ollie was brought in entertained us all at a family gathering we held. He is friendly, presentable and professional, not to mention skilled. There was a particular tune we requested, but the only sheet music we found was for the wrong instrument and in the wrong key, but Ollie adapted it and we were all thrilled with the result. Would highly recommend. Thank Ollie for making our day.

Verified
Victoria B, 1 year ago

Oliver is a very professional and talented musician. Has a good repetoire and is very versatile. Would definitely book again.