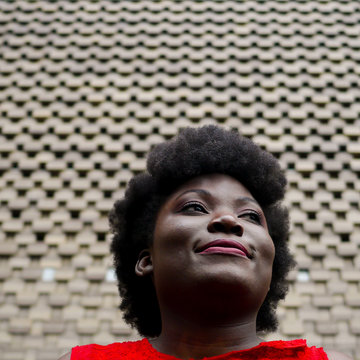 We love and live for live music. Our joy is that people feel our joy and energy from listening to our music! Led by Ogo Ajala (lead singer), we provide bespoke services on request e.g piano and voice, 3 piece band, 4 piece band, choir, e,t,c depending on your needs. We are a collection of professional musicians who have played together for over 10 years. We’ve played at high profile venues like the Union Chapel and Southbank. Most of our members have degrees in music or a minimum of a diploma. We each have the minimum of 12 years playing as musicians, producers, songwriters and recording artists. All these makes us highly skilled and versatile in genres like a soul, jazz, funk, pop, gospel and African music. Written by lead singer - Ogo Ajala

Our clients love our energy. Our clients and audience feel joy and beauty from our performances.

The singer will be the same as you’ve seen in the videos. We strive to make sure the line-up you see is what you get on the night. We do have pre-audititioned 'dep' musicians available in case a band member falls ill or is unavailable. As a professional band our reputation means everything so you can be confident that all of our players are highly skilled.

Our line-up is as follows: Vocals, guitar, bass guitar, keyboards, drums. We also have a 7 piece option that includes Sax and trumpet. We also have an option with 4 singers for a choir effect.

Absolutely. This is a really popular request and we actually offer this service for free. If you'd like a DJ service via our PA after the final set for an hour, we provide this for an additional £100.”

Our PA is included in your quote. If you require lighting, we will charge a fee based on what you’d like.

If a song isn't included in our song list there may still be a chance we already know it. If there is a special song you'd like us to learn we are happy to do this for you depending on the notice. We may request a fee of £40 for this service to take into account rehearsal times, etc.

All prices include:PA equipment and up to 3 unique song requests.
Packages
Gospel Choir4 musicians
Gospel choir of 4 strong singers for 1 hour. Accompanied by piano or guitar.
£900

We had a spectacular time. Thanks so so much Ogo you brought joy, warmth and much light. My Mum has not stopped talking about the evening or watching the videos. We were blown away. Thank You so much 💖💕❤️

The energy and talent from this band was unreal! We dance to our fill.