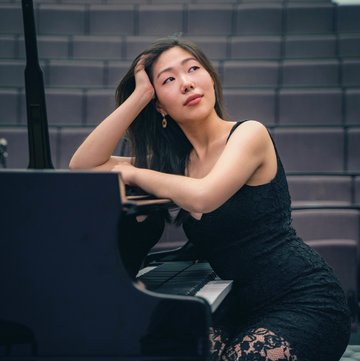 Nurry Lee is a concert pianist currently studying at the Royal College of Music with the deputy Head of Keyboard, Professor Ian Jones.
3 of 4 photos
Keyboardist
London

Nurry Lee is a South Korean - British pianist who began learning the piano at the age of six, taught by her mother. She gained her grade 8 distinction on the piano and violin when she was 11 years old. She studied at Wells Cathedral School, one of the four music schools in UK, with a full scholarship and a Specialist place to study with the Head of Keyboard there, Professor John Byrne. While studying there, she won the concerto competition with the Shostakovich Piano Concerto, working with conductors; Christopher Adey, Paul Denegrey and Dennis Simons. She has been invited to many venues as a soloist and played in the Bath Abbey, Pump rooms, Colston Hall, and invited to play for the Countess of Wessex. As well as solo work, she enjoys playing alongside other musicians and has done many collaborations with orchestras, choirs, big bands and chamber music. She is a member of the female piano trio, Trio Rouge, and has been performing all around London. They have been selected to represent RCM in the intercollegiate piano trio competition against the other UK conservatiores, and have also gotten through to the semi-finals of the Royal Oversees League Competition. This has led her to work alongside some of the greatest musicians, including the Harlem Quartet from USA, Trio Apaches and Alina Ibragimova. As a soloist, Nurry has performed around the UK and abroad, having done concerts in Europe, America, Asia and West Africa. She came to the final, and won the keyboard section of the Gregynog Young Musician of the Year, the RCM Concerto Competition and won first prize in many competitions including, Eistedford competition, Midsommer Festival, European Piano Teachers Association Competition, Rotary Competition, Longwell Green Competition. Since coming to the Royal College of Music, she is currently studying with the deputy Head of Keyboard, Ian Jones, and has been performing in many venues around London.

'Thank you so much for yesterday. I hope you enjoyed it! People specifically talked to me about your piano solo part - you did an amazing job! ... Looking forward to working with you in the future!'

'...She is an amazing young talent and will delight the audience of the (Bath) Abbey