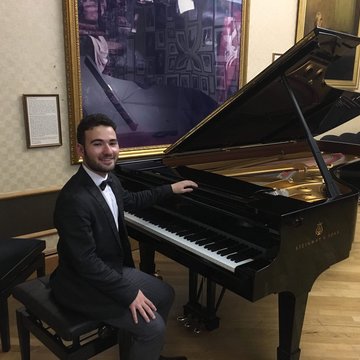 A piano student at Royal College of Music in London, looking for work as a musician to carry out his musicianship into the profession.
Pianist
Londres
Public liability insurance of £10 million

Born in Lisbon, Portugal, Nuno was awarded a scholarship in 2014 for undergraduate studies at Royal Welsh College of Music & Drama, to study piano with Michael Young. Nuno started taking piano lessons at the age of eight in Academia de Música de Lagos in Portugal with João Rosa, a former student of Michael Young. Alongside his passion for piano Nuno started flute lessons at the age of nine and the flute has been a familiar instrument to him ever since. In his country, Nuno has been a prize winner in several national and international piano competitions including; International Competition Cidade do Fundão; Concurso Internacional de Música Cidade de Almada, and IX Prémio Nacional Elisa de Sousa Pedroso. In the United Kingdom, Nuno was a finalist of the EPTA UK Piano Competition 2015 and the winner of the Eric Hodges Beethoven Competition 2015, the RWCMD Concerto Competition 2016, and the Mary Rees Chopin Prize 2016. Recently, Nuno has been selected as one of the finalists of the Ian Stoutzker prize 2018 – an award for the most outstanding performer. Nuno has also participated in several masterclasses with names such as Angela Hewitt, Katia and Marielle Labèque, Stephen Hough, Boris Berman, Tamara Stefanovich, Peter Jablonski, Artur Pizarro and Paul Badura-Skoda. Nuno has been performing regularly in the United Kingdom, Portugal and Italy. As a soloist and chamber musician, important performances include Prokofiev’s Piano Concerto N.2

Nuno is an exceptional performer, with an appetite and capacity for musical study and the intelligent pursuit of his goals as a pianist.

Nuno has proved himself a most willing and sought-after chamber musician.