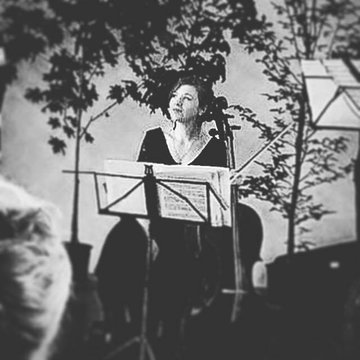 Check availability and get a free quote now - no commitment to book
From£180
About Norah
Reviews
Home page
Norah O'Leary
Like Norah?
Watch & Listen

Norah O'Leary is a baroque cellist based in Helsinki and Cork studying with Louna Hosia at Sibelius Academy of the University of Fine Arts.
Cellist
London
Public liability insurance of £1 million

Norah O’Leary holds a Bachelor of Arts in Music Performance from the Royal Irish Academy of Music (RIAM) under the tutelage of William Butt. She began her studies at the age of four with both Olwen Lewis and Heather Boxwell in the Wexford School of Music and at the age of eleven was accepted with full scholarship to study both the cello and clarinet in the Royal Irish Academy of Music. In 2006 she received a Diploma in Music Teaching and Performance, and now also holds the Teacher’s Licentiate of the Royal Academy of Music. She is currently studying for a Masters Diploma in Early Music under Louna Hosia at the Sibelius Academy of the University of Fine Arts, Helsinki. Norah has received master classes and lessons from Rolf Gjielsten, Stefan Popov, Hannah Roberts, Marc Copey, David Kenedy, Francesco Dillon, Christopher Marwood, Lucia Swarts, Jaap ter Linden, Lea Pekkala, Louna Hosia, Thomas Pitt, Mime Yamahiro-Birkman, Heidi Peltoniemi, Gerald Peregrine, Eliah Sakakushev-von Bismarck, Sarah MacMahon, Jonathan Byers and Hugh Maguire. Norah is a former member of the RIAM Symphony Orchestra, St. Hibernian’s Orchestra, Trinity College Dublin Orchestra and former principal cellist of both the RIAM Chamber Orchestra, RIAM Baroque ensemble, National Youth Orchestra of Ireland. An experienced chamber musician, Norah has travelled extensively in Europe and America, and with the RIAM Chamber Orchestra has made several performances in New York’s prestigious Carnegie Hall. Other performances include numerous appearances in the National Concert Hall, The Helix, The Tivoli Theatre, and Wexford Opera House and on Irish National Television. Norah has recorded with several up and coming popular artists as well as being one of the founding members of the RIAM’s student run ensemble, Kirkos. In the final year of her undergraduate studies Norah became a keen advocate of Historically Informed Practice and soon became the newest member of Respicio, an early music specialist ensemble and ensemble in residence with Opera Antiqua. In 2014 Norah was accepted as a baroque cellist into several distinguished European Conservatoires and has subsequently commenced her studies for a Masters in Early Music at the renowned Sibelius Academy (SibA) in Helsinki, Finland. She has already made her debut as a soloist with the SibA Baroque Orchestra and been offered collaboration projects with Concerto Copenhagen and the Royal Danish Academy of Music. In January 2015, Norah was accepted as cellist with the Nordic Baroque Orchestra that consists of leading performers from around the Nordic countries. During the course of her studies at SibA Norah has worked in close collaboration with other departments in the academy including performances with notable Irish bayanist Evin Kelly and composition students of Juhani Nuorvala. She has also been working with Finnish Baroque Orchestra (FiBO) and FiBO Storia ensemble on a professional level. Norah has filled the position of Assistant Artistic Manager with West Cork Chamber Music Festival (WCCMF) and been awarded the position of continuo cellist with WCCMF’s Baroque master class scheme as a member of Bantry Baroque in collaboration with Concerto Copenhagen. When not playing her cello Norah enjoys standing on her head and can most likely be located on a yoga mat or in the kitchen.

Norah was extremely musical, cooperative and willing to experiment with alternative instrumentation including playing the Bass Violin for concerts