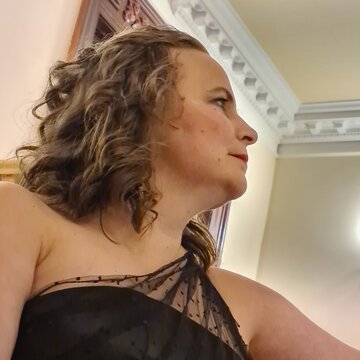 Nina is a Swedish opera and concert singer, currently based in London. She is married to the Scottish violinist and composer, Mark Wilson. Nina made her professional UK singing debut in November 2011, performing Mozart: Exsultate Jubilate with the Dunblane Chamber Orchestra, and has since been busy as a oratorio soloist and giving recitals in both England and Scotland. Highlights include a recital onboard the Cruise ship Saga "Sapphire" in February 2015, as well as recitals for the Moffat and Dumfries music societies, Paisley Abbey recital series and the Harrow Summer Music Festival. Nina enjoys collaborating with other instrumentalists and has, aside from solo recitals with piano, also given recitals with violinists, clarinettists, string trios, and string quartets. Upcoming recitals in 2018 will feature collaborations with Neil Crossland (Piano and composer), Jelena Makarova (piano), Peter Cigleris (Clarinet), Mark Wilson (violin and composer). Aside from standard repertoire, Nina has given recitals featuring newly composed works and has given many premieres. Most recently, Nina gave the premiere of Neil Crossland's song cycle "Songs of Travel and Rest" on August 3rd, 2017, which was very warmly received. As a result, further performances of the song cycle are coming up in 2018. Nina is also working as an oratorio soloist: Recent oratorio solos include the Mendelssohn: Elijah; Haydn: The Creation; Bach: Magnificat in D; Handel Messiah; Handel: Dixit Dominus; Mozart Requiem; Haydn: Kleine Orgelmesse; Vaughan Williams Mass. Nina made her operatic debut in August 2012 as Susanna in Le Nozze di Figaro with Aria Alba, and her Professional operatic debut, again as Susanna, with a new company, VoiceArc, in March, 2015. Since then, Nina has been cast in a number of operatic roles: highlights include Olympia (Tales of Hoffmann), Fiordiligi (Cosi fan Tutte), Die Konigin der Nacht (Die Zauberflote), Miss Wordsworth (Albert Herring), the Governess (The Turn of the Screw), Vitellia (La Clemenza di Tito), Donna Elvira (Don Giovanni), and the role of "Zerlina" in Time Zone Theatre's Mozart-Medley "A Night in Vienna", which went on a 2 month UK Tour, in May/June 2017. Nina's Musical background: Nina has a BMus(Hons) and PG Dip in viola performance from the Birmingham Conservatoire, where she studied with Rivka Golani. Nina worked for many years as a freelance viola player with orchestras such as the RSNO, Scottish Ballet and many others. Nina also worked as principal viola player of the Orquestra do Estado de Mato Grosso for 2 years (2006-2007). Nina still plays the violin and viola professionally alongside her singing: her most recent project was playing solo viola in TimeZone Theatre's production of Rimsky Korsakov's "Mozart and Salieri" and solo violin in Mascagni's Zanetto for the Opera in the City Festival, 2017. The production of Mozart and Salieri had previously had various tour dates during 2016 and 2017. Nina also played solo violin and viola for Secret Opera's touring production of CarMen for various dates in 2016.

The second half of the evening was a production of the Mozart medley A Night in Vienna. Set in the reception area of the Vienna Grand Hotel and including songs from Mozart’s most famous Operas: Don Giovanni, The Magic Flute, Cosi fan tutte and The Marriage of Figaro. Two men vie for the love of one woman and use all the tricks in the book to win her. Aidan Coburn, Nick Dwyer and Nina Kopparhed are all wonderful and the English libretto by Pamela Schermann is at times hilarious. Brilliantly acted by all three performers and Aidan Coburn’s singing is so beautiful I was almost moved to tears. A thoroughly enjoyable evening

Nina really came into her own in her performance of three songs by Frank Bridge...The standard throughout was extraordinarily fine both musically and technically

And on top of this was your gift of using your voice, facial expressions and discreet body language to convey the changing emotions and moods the songs demanded. The music came alive... I have never heard a better performance of Shepherd on the Rock, live or on disc"