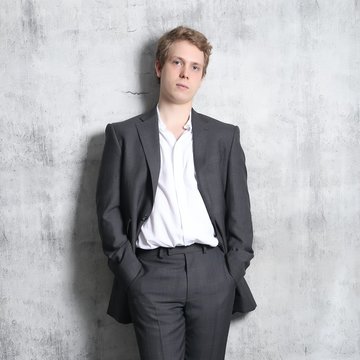 Young classical pianist keen to engage with all audiences, through all music from Baroque to Contemporary
Pianist
London
Public liability insurance of £10 million

Born in Leeds in 1993, Niklas Oldemeier has in recent years been attracting increasing attention from the press and public as an emerging young talent. He started to play the piano at the age of five, and at eleven was accepted to study at Chetham’s School of Music in Manchester. On graduating in 2011, he enrolled at the Royal Academy of Music and completed the BMus and MA programmes under the tutelage of Sulamita Aronovsky. Niklas’ concert repertoire embraces a wide range of genres, from Baroque to Contemporary. He is particularly interested in contemporary composers and has performed works by Graham Fitkin and Luke Bedford, and premiered compositions by Jules Matton and James Moriarty. An active performer in diverse capacities, Niklas was awarded the Worshipful Company of Musicians’ Bach Prize, and also won a place on the Emerging Artists Programme at the London Sinfonietta Academy, led by the conductor Pierre Andre Valade. This offered him the opportunity to perform with the world’s leading contemporary music ensemble, and concluded with the ‘Musicians of Tomorrow’ concert at the Platform Theatre. His performing activities have taken him to several countries throughout Europe, including Germany, Italy, Greece and Romania. Winner of the Deena Shypitka Music Award, Niklas also regularly appears with orchestra and in recitals throughout the UK and in London. Notable highlights have included solo concerts at St James’ Piccadilly and Regent Hall, as well as Mozart and Beethoven concertos in Wakefield and Chester respectively, earning high critical praise from Radio 3’s Rob Cowan. Most recently, his rendition of Brahms’ Handel Variations along with Carmina Burana at the Royal Hall in Harrogate was received with high acclaim. He also performed as a featured Young Artist at the newly-built Stoller Hall in Manchester for Chetham’s International Summer School and Piano Festival. Niklas Oldemeier represents the highest echelon of young British pianists, and his performances always inspire an enthusiastic response.

Niklas put on a fantastic private show for my birthday. We were all impressed with his piece selection and skills. Highly recommend his playing.

...the first movement had flowing grace, the third was deeply pondered with the tempi and tone throughout being finely judged... followed by an equally fine Petrushka.

...in his confident hands Beethoven’s op. 101 was spacious and persuasive, with great delicacy in the shading and phrasing. To Liszt’s Sonnetto 104 he brought flawless virtuosity... his future looks bright.

The pianist’s interpretation of the intricacies of the score was incisive, and his controlled playing... displayed great finesse and sensitivity