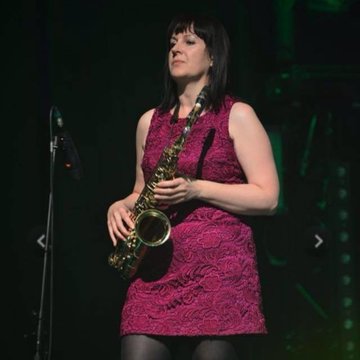 Nicky Baigent studied clarinet and saxophone at Leeds University and now works as a clarinet and sax player; engagements include the Ulster Orchestra, London Orchestra da Camera, the London Musical Arts Orchestra and the Chandos Orchestra. As a member of the North Sea Radio Orchestra she has played on 4 albums and well as sessions for BBC radio 2 and 6; other recordings include incidental music for the films Shifty and Poppy Shakespeare, Sugar Plum Stories for CBeebies, William D Drake’s albums The Rising of the Lights and Revere Reach, and for the band Stornoway. TV/Radio work includes the BBC series Michael Palin’s New Europe, Samuel Beckett plays for radio 3 (Autumn 2016), Who Do you think you are?, and A Jubilee Tribute to the Queen by the Prince of Wales (BBC1). She has played for the National Theatre, the Hanover Band and for John Wilson’s band; she is also a member of the Gatsby Saxophone Quartet which plays the light music of the 1920s on vintage saxes.