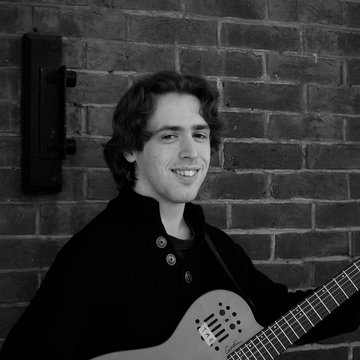 Nick Tudgey is a young guitarist from Southampton, UK who has gained international recognition for his aproach to Fingerstyle Guitar.
Guitarist
Southampton

About: Nick was born in 1995 in Fareham, Hampshire, UK, and spent his first years in Stubbington on the south coast. He became really interested in music when he was at Henry Cort Community College, Fareham, where he played mandolin in the school's concert band and lead guitar in a rock band he formed in his final year. It was here that he really got the bug for playing. He decided he really wanted to study music at College and earned a place at the Academy of Music and Sound in Southampton where he studied for 2 years. It was here that he developed and improved his technique for fingerstyle guitar. Style of Music: Recognised by musicians the world over as one of the top young guitarists in the UK. Nick Tudgey is known for his unique approach to the instrumental music known as fingerstyle guitar, taking foundations of playing laid down by legends such as Chet Atkins and Merle Travis, and blending them with many styles of music and musicians, from rock icons such as Ritchie Blackmore and Mark Knopfler, to John Dowland, the 16th century lutenist and composer. In 2014, Nick played for BBC Radio 2 presenter Chris Evans at his Children in Need Charity fundraiser, the same year, he became the only instrumental musician ever to compete at Open Mic UK, one of the UK's largest competitions for singers, getting as far as the semi-finals and never sang a word. And in July 2018, was an international guest at the Chet Atkins Appreciation Society's annual convention in Nashville, Tennessee. In November the same year, he was enrolled into the MAS Records Scheme, sponsored by Robert Plant of Led Zepplin.