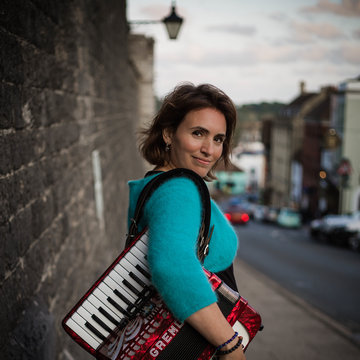 TALIA loved music from an early age. For as long as she can remember she would sing beside her father while he played the concertina, which is an instrument widely played in the Folk groups of Northern Portugal. Aged seven, her father takes her to an accordion shop and offers her an accordion of her very own. She is immediately smitten... Growing up in London with Portuguese parents who both came from large traditional families, she would often find herself the centre of attention at big family gatherings playing her eclectic repertoire. Although fairly timid and described by her brother as “painfully shy”, with this jolly audience TALIA flourished in these happy moments, with aunties, uncles and cousins dancing and singing along. TALIA has always known the power of music and what it means to “light up a room”. She carries this positive intention with her today. At a TALIA performance you hear every word and every word comes directly from the heart. Audiences fall in love with her sound and are entranced by her magical presence. With over a million views online, performances for both BBC Television and The Royal Shakespeare Company. TALIA’S repertoire covers many music genres: She sings in English with a twist of Portuguese and Spanish and is equally happy playing both at intimate events and at festivals worldwide with large audiences. At the tender age of eleven she was already performing in a production of Dr Jekyll and Mr Hyde with the RSC at The Barbican. At twelve years old, for BBC Television and at seventeen TALIA performed live on The National Lottery TV Programme. With a rich catalogue of performances, TALIA has appeared at; The Royal Academy of Arts (alongside Jamie Cullum); and at various festivals in the UK (including Glastonbury) as well as with Charles Castronovo from The Royal Opera House. She also performed in two exciting productions at The Kings Head Theatre in London (Quasimodo and Die Fledermaus). TALIA performed at Paradise supporting Gary Kemp from Spandau Ballet. She then went on to travel around Europe performing in eleven cities. TALIA has enjoyed performing in Art Galleries including Rebecca Hossack’s Gallery in London, Sharon Yamamoto’s Gallery in Holland Park and for Sara Twomey who worked for Damien Hirst. Still true to her Portuguese roots, TALIA has been appearing at various community festivals including those at Grantham and Somerset this year, also a special event at Chancellors Hall, University of London representing the Portuguese Culture within Portugal, Cape Verde and Brazil. TALIA has collaborated with Artist Randolph Matthews at the infamous Ronnie Scott’s Bar in London. Besides her multiple talents, TALIA runs Busking Workshops for CEO’s from multiple Organisations. Her goal is to inspire leadership, team building and communication through her workshops.

NEW!Virtual services
Personalised Music Message
Book me to create a unique music video for you to send to a friend as a gift. This could be a birthday message, first dance song for a wedding anniversary, or just your friend's favourite song to cheer them up.
£15
TALIA
I provide an hour’s entertainment of singing and performing only joyful songs on a private zoom link for your Special Occasion.
£250

Talia was such positive fun! Great singer and player. Fabulous for a really fun event especially with children. Superb.

Natalie was excellent communicating with our guests. She took very little time to set up of course. Excellent....easy to listen to whilst eating and then dance to afterwards Excellent vaue

'Not only is Natalia the most talented accordionist I've ever met, she is a remarkable human being and it was an honour to have her play at our wedding. She personalised the day for us, not only playing her complex and beautiful repertoire featuring the likes of our favourite accordionist, Yann Tiersen, but she also played (upon request for our rather strange ceremony) a few 'lesser-known' accordion 'classics': 'Home on the Range' and 'Jerusalem.' I will never forget hearing her begin to play 'La Valse d'Amelie' as I began my wedding procession into the meadow where I would marry my husband. She has a perfect presence when she plays, our guests loved her, and she truly made that day special for us. She was also very happy to have a drink with me in advance to chat about the wedding and get to know me. When we met I realised she is an absolutely lovely, glowing spirit who is always thinking of others. I'm so glad we flew her all the way to France for our big day! She was so worth it and we'll never forget her.'

The guests really loved your performance. We found you to be very professional and importantly very enthusiatic, warm and welcoming to our guests. We really liked the way you mingled amongst our guests and delivered a lovely musical backdrop to our drinks reception. I would highly recommend you to anyone looking for an accordianist.