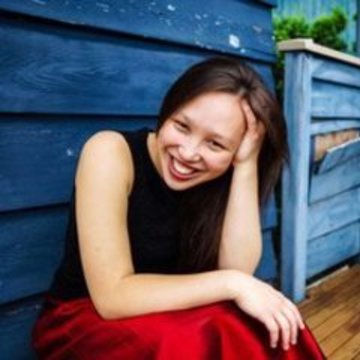 Naomi is a versatile pianist, harpsichordist, conductor, and musicologist based in Cambridge and London. www.naomiwoo.com
Pianist
London

Canadian-born Naomi Woo is a pianist, conductor and researcher. Equally at home on the harpsichord, the prepared piano and the podium, Naomi frequently performs and conducts a wide variety of music as both a soloist and chamber musician. In the past year, notable engagements have included performing Ravel's Piano Concerto in G Major with the Cambridge University Chamber Orchestra, conducting the world premiere of Susie Self’s Spirit Wagon for singers and chamber orchestra, and solo recitals in New York City, Montreal, Toronto and Vancouver. In 2011, her debut in Carnegie Hall was praised as an “elegant performance” in the New York Times. Naomi studied Mathematics, Philosophy and Music at Yale University. After spending some time in Montreal working with Marc Durand and performing—with the generous support of a grant from the Canada Council for the Arts—Naomi is currently a PhD student in Musicology at Cambridge University in England. Naomi has studied piano with Christopher Elton, Melvin Chen, Wei-Yi Yang, Boris Berman, Nelita True, and Lorraine Ambrose; violin with Kyung Yu and Joan Blackman; chamber music Michael Friedmann and Joseph Elworthy; harpsichord with Avi Stein and Robert Mealy; and conducting with Toshiyuki Shimada.

Naomi was punctual, friendly, and adapted to our event with the greatest of ease! She had a portfolio of pieces ready to play and was also open to any suggestions from our guests and organisers. The best review would be to say that our guests profusely complimented her piano playing. I would highly recommend booking Naomi as she fulfilled exactly what we expected and more!

Excellent pianist who was really friendly with my ABRSM pupils and kept them calm with her wonderful playing. Will use again.